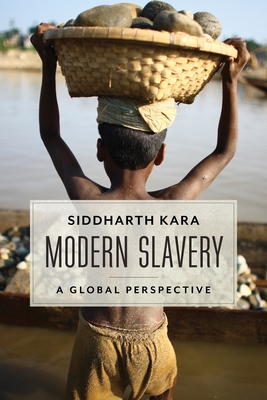 By Siddharth Kara
Email or call for price

Siddharth Kara is a tireless chronicler of the human cost of slavery around the world. He has documented the realities of human trafficking and forced labor in order to reveal the degrading and dehumanizing system that strips people of their dignity for the sake of profit--and to link the suffering of the enslaved to the day-to-day lives of consumers in the West. In Modern Slavery, Kara draws on his many years of expertise to demonstrate the scope of slavery and offer a concrete path to its abolition.

From labor trafficking in the U.S. agricultural sector to sex trafficking in Nigeria to forced labor in the Thai seafood industry, Kara depicts the myriad faces and forms of slavery, providing a comprehensive grounding in the realities of modern-day servitude. Drawing on sixteen years of field research in more than sixty countries around the globe--including revelatory interviews with both the enslaved and their oppressors--Kara sets out the key manifestations of modern slavery and how it is embedded in global supply chains. Enslavement offers immense profits at minimal risk through the exploitation of vulnerable subclasses whose brutalization is tacitly accepted by the current global economic order. Kara has developed a business and economic analysis of slavery based on metrics and data that attest to the scale and functioning of these systems of exploitation. Beyond this data-driven approach, Modern Slavery unflinchingly portrays the torments endured by the powerless. This searing expose documents one of humanity's greatest wrongs and lays out the framework for a comprehensive plan to eradicate it.

Siddharth Kara is a senior fellow and lecturer at the Harvard Kennedy School of Government, a senior fellow at the Harvard School of Public Health, and a lecturer at the University of California, Berkeley. He is the author of Sex Trafficking: Inside the Business of Modern Slavery (2008) and Bonded Labor: Tackling the System of Slavery in South Asia (2012), both from Columbia University Press.