The Politics of Losing: Trump, the Klan, and the Mainstreaming of Resentment (Hardcover) 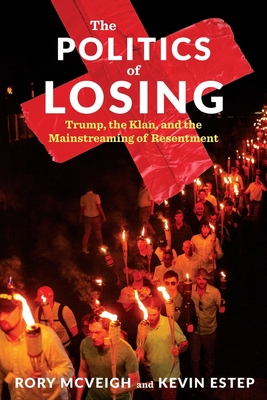 By Rory McVeigh, Kevin Estep
Email or call for price
Ships to Our Store in 1-5 Days

The Ku Klux Klan has peaked three times in American history: after the Civil War, around the 1960s Civil Rights Movement, and in the 1920s, when the Klan spread farthest and fastest. Recruiting millions of members even in non-Southern states, the Klan's nationalist insurgency burst into mainstream politics. Almost one hundred years later, the pent-up anger of white Americans left behind by a changing economy has once again directed itself at immigrants and cultural outsiders and roiled a presidential election. In The Politics of Losing, Rory McVeigh and Kevin Estep trace the parallels between the 1920s Klan and today's right-wing backlash, identifying the conditions that allow white nationalism to emerge from the shadows. White middle-class Protestant Americans in the 1920s found themselves stranded by an economy that was increasingly industrialized and fueled by immigrant labor. Mirroring the Klan's earlier tactics, Donald Trump delivered a message that mingled economic populism with deep cultural resentments. McVeigh and Estep present a sociological analysis of the Klan's outbreaks that goes beyond Trump the individual to show how his rise to power was made possible by a convergence of circumstances. White Americans' experience of declining privilege and perceptions of lost power can trigger a political backlash that overtly asserts white-nationalist goals. The Politics of Losing offers a rigorous and lucid explanation for a recurrent phenomenon in American history, with important lessons about the origins of our alarming political climate.

Rory McVeigh is the Nancy Reeves Dreux Professor in Sociology and director of the Center for the Study of Social Movements at the University of Notre Dame. He is author of The Rise of the Ku Klux Klan: Right-Wing Movements and National Politics (2009) and coeditor of American Sociological Review. Kevin Estep is assistant professor in the Department of Cultural and Social Studies at Creighton University. His research focuses on the consequences of residential sorting on politics and public health.