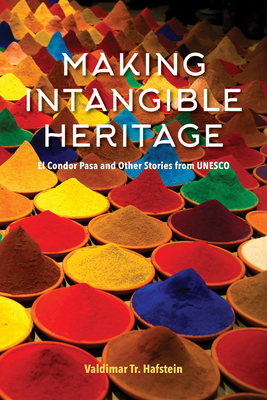 In Making Intangible Heritage, Valdimar Tr. Hafstein--folklorist and official delegate to UNESCO--tells the story of UNESCO's Intangible Heritage Convention. In the ethnographic tradition, Hafstein peers underneath the official account, revealing the context important for understanding UNESCO as an organization, the concept of intangible heritage, and the global impact of both. Looking beyond official narratives of compromise and solidarity, this book invites readers to witness the diplomatic jostling behind the curtains, the making and breaking of alliances, and the confrontation and resistance, all of which marked the path towards agreement and shaped the convention and the concept.

Various stories circulate within UNESCO about the origins of intangible heritage. Bringing the sensibilities of a folklorist to these narratives, Hafstein explores how they help imagine coherence, conjure up contrast, and provide charters for action in the United Nations and on the ground. Examining the international organization of UNESCO through an ethnographic lens, Hafstein demonstrates how concepts that are central to the discipline of folklore gain force and traction outside of the academic field and go to work in the world, ultimately shaping people's understanding of their own practices and the practices themselves. From the cultural space of the Jemaa el-Fna marketplace in Marrakech to the Ise Shrine in Japan, Making Intangible Heritage considers both the positive and the troubling outcomes of safeguarding intangible heritage, the lists it brings into being, the festivals it animates, the communities it summons into existence, and the way it orchestrates difference in modern societies.

Valdimar Tr. Hafstein is Professor of Folklore, Ethnology, and Museum Studies at the University of Iceland. Former Chair of Iceland's National Commission for UNESCO and ex-president of the International Society for Ethnology and Folklore (SIEF), he is the author of a number of scholarly articles and books on intangible heritage, cultural property, international heritage politics, folklore, and copyright in traditional knowledge.