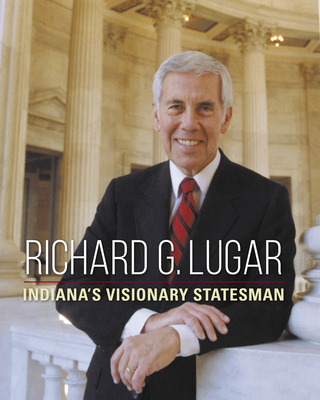 In the senatorial election of 1976, the people of Indiana offered a gift not only to the nation but to the world. For 36 years, Richard G. Lugar tirelessly and with great deliberation worked to advance causes of peace, health, and economic prosperity at home and abroad. This included the widespread elimination of nuclear, chemical, and biological weapons through the Nunn-Lugar Cooperative Threat Reduction Program. Respected and even beloved for his global initiatives and bipartisan efforts, in 2013 Lugar was awarded the Presidential Medal of Freedom in the United States and, in England, the rank of Knight Commander of the Most Excellent Order of the British Empire.

Featuring insightful commentary and memorable photographs spanning the entirety of Senator Lugar's career, Richard G. Lugar: Indiana's Visionary Statesman is an indispensable companion to an exhibition of his papers at the world-famous Lilly Library at Indiana University.

Dan Diller is Director of Policy at The Lugar Center. He served ten years as Legislative Director to Senator Richard Lugar and another ten years as Deputy Staff Director of the Senate Foreign Relations Committee. In these capacities he oversaw foreign and domestic policy development for Senator Lugar.Sara Stefani received a Ph.D. in Slavic Languages and Literatures from Yale University. She taught courses in Russian language, literature, and culture, and she has held faculty positions at Grinnell College, Oberlin College, and most recently Indiana University in Bloomington. She is currently the Project Archivist for the Richard G. Lugar Senatorial Papers collection at Indiana University Bloomington and the curator of an exhibition on the Senator's life and career.