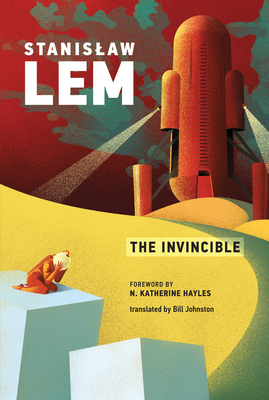 
Available at One of Our Locations
A space cruiser, in search of its sister ship, encounters beings descended from self-replicating machines.

In the grand tradition of H. G. Wells and Jules Verne, Stanisław Lem's The Invincible tells the story of a space cruiser sent to an obscure planet to determine the fate of a sister spaceship whose communication with Earth has abruptly ceased. Landing on the planet Regis III, navigator Rohan and his crew discover a form of life that has apparently evolved from autonomous, self-replicating machines—perhaps the survivors of a “robot war.” Rohan and his men are forced to confront the classic quandary: what course of action can humanity take once it has reached the limits of its knowledge? In The Invincible, Lem has his characters confront the inexplicable and the bizarre: the problem that lies just beyond analytical reach.

Stanisław Lem (1921–2006), a writer called “worthy of the Nobel Prize” by the New York Times, was an internationally renowned author of novels, short stories, literary criticism, and philosophical essays. His books have been translated into forty-four languages and have sold more than thirty million copies.

N. Katherine Hayles is Professor of English and Design/Media Arts at the University of California at Los Angeles.
“Mr. Lem was a giant of mid-20th-century science fiction, in a league with Arthur C. Clarke, Isaac Asimov, and Philip K. Dick.” —The New York Times

"In a cycle of melancholy sci-fi novels written in the late nineteen-fifties and sixties—Eden, Solaris, Return from the Stars, Memoirs Found in a Bathtub, The Invincible, and His Master’s Voice—Lem suggested that life in the future, however remote the setting and however different the technology, will be no less tragic. Astronauts disembark from a spaceship into the aftermath of an atrocity; scientists face an alien intelligence so unlike our own that their confidence in the special purpose of human life falters. Lem was haunted by the idea that losses can overwhelm the human capacity to apprehend them." —The New Yorker

"Fourteen years after his death, the universe is still struggling to catch up with the vast creative force that was Stanisław Lem. And for my money, it won't be surpassing him anytime soon…Enjoying the genius of Lem requires readerly dexterity and a willingness to go wherever the author takes you…These marvelous, absorbing and often hilarious books make our weary universe seem pale and undistinguished by comparison." —The Washington Post

"The release of these new volumes seems to expand the possibilities of what a university publisher can do." —LitHub