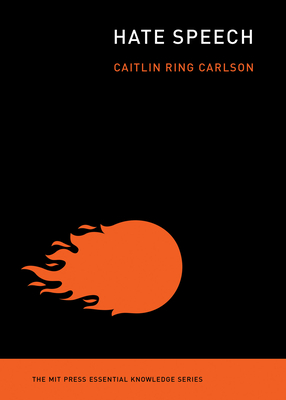 
Available at One of Our Locations
An investigation of hate speech: legal approaches, current controversies, and suggestions for limiting its spread.

Hate speech can happen anywhere--in Charlottesville, Virginia, where young men in khakis shouted, "Jews will not replace us"; in Myanmar, where the military used Facebook to target the Muslim Rohingya; in Capetown, South Africa, where a pastor called on ISIS to rid South Africa of the "homosexual curse." In person or online, people wield language to attack others for their race, national origin, religion, gender, gender identity, sexual orientation, age, disability, or other aspects of identity. This volume in the MIT Press Essential Knowledge series examines hate speech: what it is, and is not; its history; and efforts to address it.
Caitlin Ring Carlson is Associate Professor in the Communication Department at Seattle University. Her research focuses on media law, policy, and ethics from a feminist perspective. Her work has been featured in the Wall Street Journal, Wired, and Venture Beat, as well as such leading academic publications as the Journal of Media Law and Ethics.
"Carlson presents a compelling view of a problem that seems to have no good answer and yet she provides suggestions for methods that might help to end the easy spread of hate speech in media and online.”—Shelf Awareness