An American Paradox: Censorship in a Nation of Free Speech (Hardcover) 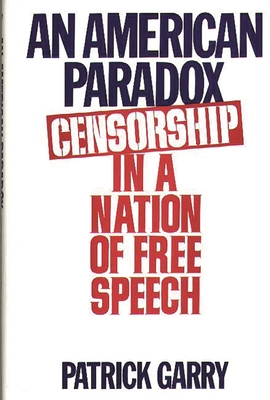 By Patrick Garry
Email or call for price

Although speech in America may be more free and robust than anywhere else on earth, censorship has maintained its grip on American society and has even increased in recent years. Not only is censorship occurring in many different areas of speech, but it is also being advocated by new groups of sponsors. In recent years, liberals have taken as active a role in censorship as have conservatives. Of all the struggles waged in the 1960s, perhaps the one thought victorious was that against censorship. Yet, as adults, the generation of the 1960s is pushing a campaign of censorship more widespread than the one it faced as youth.

In An American Paradox, Patrick Garry examines the changing nature of censorship and the social impulses that produce it. His beautifully written book is a thought-provoking one about our national psyche and the cultural wars that are generating restrictions on speech in the arts, music, television, and even in the universities. Garry describes fundamental contradictions and paradoxes in a nation devoted to speech and individual freedoms. With speech so close to the national soul, an understanding of the censorship impulse not only may help to eliminate destructive conflicts over censorship issues but also may contribute to a greater appreciation and knowledge of the complexity of the American social fabric.

PATRICK GARRY is a Visiting Scholar at Columbia University School of Law and a Fellow at the Freedom Forum Media Studies Center at Columbia University, where he is researching and writing on media and First Amendment topics. He is the author of An American Vision of a Free Press (1990), and Liberalism and American Identity (1992).