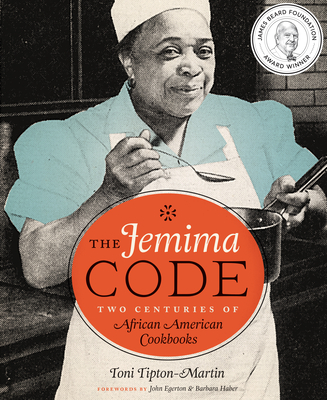 Women of African descent have contributed to America’s food culture for centuries, but their rich and varied involvement is still overshadowed by the demeaning stereotype of an illiterate “Aunt Jemima” who cooked mostly by natural instinct. To discover the true role of black women in the creation of American, and especially southern, cuisine, Toni Tipton-Martin has spent years amassing one of the world’s largest private collections of cookbooks published by African American authors, looking for evidence of their impact on American food, families, and communities and for ways we might use that knowledge to inspire community wellness of every kind.

The Jemima Code presents more than 150 black cookbooks that range from a rare 1827 house servant’s manual, the first book published by an African American in the trade, to modern classics by authors such as Edna Lewis and Vertamae Grosvenor. The books are arranged chronologically and illustrated with photos of their covers; many also display selected interior pages, including recipes. Tipton-Martin provides notes on the authors and their contributions and the significance of each book, while her chapter introductions summarize the cultural history reflected in the books that follow. These cookbooks offer firsthand evidence that African Americans cooked creative masterpieces from meager provisions, educated young chefs, operated food businesses, and nourished the African American community through the long struggle for human rights. The Jemima Code transforms America’s most maligned kitchen servant into an inspirational and powerful model of culinary wisdom and cultural authority.

Toni Tipton-Martin is a culinary journalist and author of several books, including Jubilee: Recipes from Two Centuries of African American Cooking. She was the first African American food editor of a major daily newspaper—the Cleveland Plain Dealer. Her collection of more than three hundred African American cookbooks was exhibited at the James Beard House and she was recognized twice by First Lady Michelle Obama at the White House for her community service work. Tipton-Martin is a cofounder and former president of both the Southern Foodways Alliance and Foodways Texas. She lives in Baltimore, Maryland.

The Jemima Code is no ordinary book. It’s a heaping helping, a long overdue acknowledgment of African-Americans who have toiled in this field since the country’s beginnings. With eloquence and urgency, Tipton-Martin makes the case that without the people of the African diaspora not only would America’s food be different, so would its culinary conversation.
— The New York Times Book Review

[The Jemima Code is] that rare coffee table book that serves up important history and compelling imagery in digestible, bite-size chunks that still stick to your ribs.
— Michel Martin

A beautiful and essential corrective to the ongoing erasure of generations of black American culinaria and its indelible influence on American cuisine writ large.
— The New Yorker, "The Best Cookbooks of the Century So Far"

Toni has gleaned a complicated and nuanced story of African American accomplishment. By gathering African American cookbook writers under one set of covers, Toni has framed their labor, their vision, their worldview.
— Gravy

If you want to know the truth about the complicated icon on pancake boxes, please check out The Jemima Code . . . Tipton-Martin asserts Black women's true contribution to fine food.
— ESSENCE

The cookbooks featured in The Jemima Code exemplify a richness and diversity of African-American cooking and food knowledge far beyond traditional “soul” food . . . [they] help illustrate the sophistication and expertise that African-American women brought to the kitchens in which they worked.
— Women in the World, New York Times

Tipton-Martin presents a new look at the influence of black chefs and their recipes on American food culture. Her goals are two-fold: to expand the broader community’s perception of African-American culinary traditions and to inspire African Americans to embrace their culinary history.
— Smithsonian Magazine

Toni Tipton-Martin does a great job of setting the record straight with her book The Jemima Code . . . she classifies, introduces, explains, and puts into context many African-American cookbooks from the last hundred and fifty years or so, often illustrating the text with images and pages from the original works she discusses. She not only offers her own interpretations, but also allows readers to get a sense of the language, the style, as well as the visual and material worlds that the African-American authors of the past inhabited. Above all, Tipton-Martin demonstrates how these men and women were not victims, but expressed their own personality and agency in their work, striving to be accomplished cooks or maître d's.
— Huffington Post

By illuminating the past, food activist and author Toni Tipton-Martin is reframing the future. In her new book, The Jemima Code: Two Centuries of African American Cookbooks (the University of Texas Press), Tipton-Martin gives voice to the African Americans who worked in kitchens throughout the United States, revealing the wisdom, artistry, and values that characterize their role in culinary history.
— Texas Highways

Many of these books haven’t much been seen outside of the state where they were published, or in the years since they appeared, let alone in each other’s company. Tipton-Martin’s affectionate compilation presents an unprecedented opportunity to track the evolution of black cooking in America.
— The Charleston Post and Courier

The Jemima Code is more than a book about books. Through chapters with titles like "Surviving Mammyism," "Lifting as We Climb," "Soul Food" and "Sweet to the Soul," Tipton-Martin uses the cookbooks to tell a story of race and identity in the U.S.
— The Chicago Tribune

An entertaining and informative survey of black culinary arts through the ages and a commentary on how slavery and servitude shaped its evolution.
— The Atlanta Journal-Constitution

As a retrospective, the book’s succinct overview of a very wide topic makes it a fantastic reference manual.
— Fast Company

One of the most essential, beautiful, powerful food books of our era.
— Helen Rosner, Executive Editor

If you are a food lover, add James Beard award winner The Jemima Code, from journalist and food historian Toni Tipton Martin, to your reading list. It is a great compilation of 200 years of African-American cookbooks and the invisible cooks who have produced them. Food bears hidden gems about history and culture in America and beyond.
— NBCNews.com

It would not be an exaggeration to say that Tipton-Martin's 2015 book, The Jemima Code, changed the world: it smashed stereotypes and revived scores of Black recipes that had been systematically co-opted and erased.
— Esquire