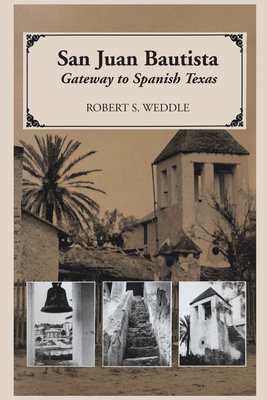 In their efforts to assert dominion over vast reaches of the (now U.S.) Southwest in the seventeenth century, the Spanish built a series of far-flung missions and presidios at strategic locations. One of the most important of these was San Juan Bautista del Río Grande, located at the present-day site of Guerrero in Coahuila, Mexico.

Despite its significance as the main entry point into Spanish Texas during the colonial period, San Juan Bautista was generally forgotten until the first publication of this book in 1968. Weddle's narrative is a fascinating chronicle of the many religious, military, colonial, and commerical expeditions that passed through San Juan and a valuable addition to knowledge of the Spanish borderlands. It won the Texas Institute of Letters Amon G. Carter Award for Best Southwest History in 1969.

ROBERT S. WEDDLE is an award-winning historian and the author of more than a dozen books on the Spanish and French colonial history of Texas and the Gulf Coast.
San Juan Bautista is one of the most interesting and rewarding books on a Spanish borderland topic to appear in recent years. It is highly recommended.
— Journal of the West