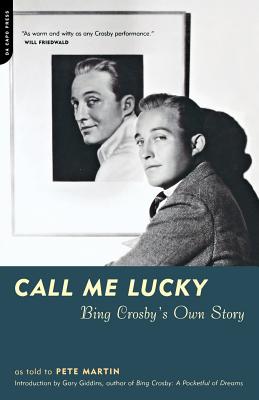 Bing Crosby once said, when asked to explain his success, "Every man who sees one of my movies or who listens to my records or who hears me on the radio, believes firmly that he sings as well as I do, especially when he is in the bathroom shower." And it's not surprising that his classic autobiography, Call Me Lucky, is written in the casual, confident tone of a man singing in the shower. In these pages, Bing tells us how he developed his unique style to produce an unequaled string of hit jazz and pop records, and shares stories about music, horses, golf, movies, and contemporaries--Bob Hope, Bix Beiderbecke, Louis Armstrong, to name just a few. Writing at the apex of his fame, Crosby looks back on a rich and absorbing life--and a phenomenal career--and says with Bingian modesty, hey, Call Me Lucky.

"Call Me Lucky remains one of the most enchanting of all show business memoirs. It not only chronicles, with reasonable accuracy, the life of a central figure in the popular culture of this century, but reproduces the merry, occasionally guileful tone Bing Crosby perfected on radio and in movies. This is Crosby the way he wanted to be known to his adoring public and in all likelihood to himself."--Gary Giddins

Pete Martin was a writer for the Saturday Evening Post.