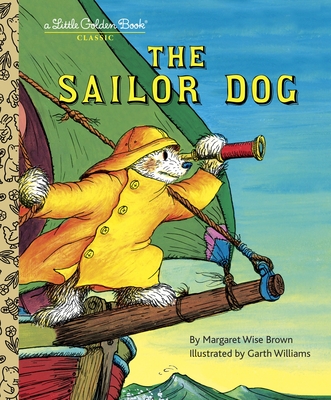 Scuppers the Dog wants to be a sailor. He was born at sea and he wants nothing more than to return to water. Finally, after a long time, Scuppers gets the chance to go out into the deep blue ocean—but his ship gets wrecked! Oh no! But Scuppers won’t let that bother him. He fixes his boat and gets right back to it!
Margaret Wise Brown (1910–1952), best known as the author of Goodnight Moon, wrote countless children’s books inspired by her belief that the very young are fascinated by the simple pleasures of the world around them. Among her many bestselling books are The Little Island, The Golden Egg Book, The Color Kittens, and The Sailor Dog.

Garth Williams (1912–1996) was known for his realistic yet highly expressive animal characters. He brought to life some of the best-loved children’s books of the twentieth century, including Laura Ingalls Wilder’s Little House series and E. B. White’s Charlotte’s Web and Stuart Little. Williams illustrated many timeless Golden Books, including Baby Farm Animals, Mister Dog, and The Friendly Book.