The Utility of Force: The Art of War in the Modern World (Paperback) 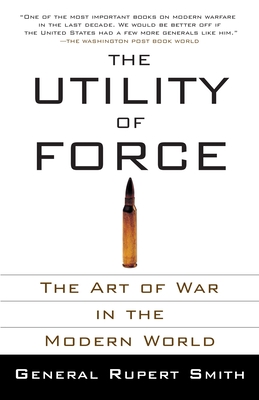 From a highly decorated general, a brilliant new way of understanding war and its role in the twenty-first century.

Drawing on his vast experience as a commander during the first Gulf War, and in Bosnia, Kosovo, and Northern Ireland, General Rupert Smith gives us a probing analysis of modern war. He demonstrates why today’s conflicts must be understood as intertwined political and military events, and makes clear why the current model of total war has failed in Iraq, Afghanistan, and other recent campaigns. Smith offers a compelling contemporary vision for how to secure our world and the consequences of ignoring the new, shifting face of war.

General Rupert Smith spent 40 years in the British Army, commanding the UK Armoured Division in the Gulf War, general in charge in Northern Ireland, commander of the UN forces in Bosnia and Deputy Commander of NATO. He lives in London.

“One of the most important books on modern warfare in the last decade. We would be better off if the United States had a few more generals like him.” —The Washington Post Book World

“An impressive and absorbing work of military analysis. . . . Smith is the Clausewitz of low-intensity conflict and peacekeeping operations. . . . He brilliantly lays bare the newfound limits of Western military power.” —The New York Times Book Review

“It is hard to overstate the devastating nature of this book as an indictment of almost everything the West has done in recent years, and is doing today.” —The Sunday Telegraph

“A closely argued, searching textbook on strategy and the efficient use of military power in the post-Cold War era.” —The New York Times