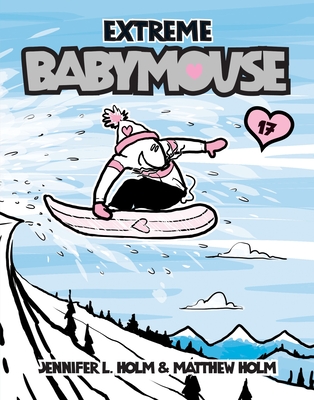 This is book number 17 in the Babymouse series.

Meet Babymouse—the spunky mouse beloved by young readers for more than a decade! It’s time to hit the slopes—Babymouse style. Will Babymouse make it down the mountain or get a face full of snow? This groundbreaking young graphic novel series, full of humor and fun, is a bestseller that’s sold more than three million copies!

Grab your board!
The powder's fresh and Babymouse is hitting the slopes in the 17th installment of the popular, award-winning graphic novel series by Matthew Holm and three-time Newbery Honor winner Jennifer L. Holm! (Uh, snowboarding, Babymouse? Is that really a good idea? You don't exactly have a good history with . . . er, being outside). Will Babymouse make it off the bunny slope? Will this winter be extreme—or just extremely lame? And does locker really have a cousin?  Find out in Extreme Babymouse—the 17th hilarious, action-packed installment of the beloved Babymouse graphic novel series!

DON'T MISS The BIG Adventures of Babymouse: Once Upon a Messy Whisker, the newest, brightest, and BIGGER THAN EVER graphic novel from BABYMOUSE!
Brother-and-sister team MATTHEW HOLM and JENNIFER L. HOLM  are both avid skiiers, though Jennifer did learn to snowboard while writing this book (she still can't sit down). They're pretty sure that with a little more practice, they could both totally be epic. Today, Jennifer is the New York Times bestselling author of several highly acclaimed novels, including three Newbery Honor-winners, Our Only May Amelia, Penny from Heaven, and Turtle in Paradise. Matthew Holm is a graphic designer and freelance writer. They are also the creators of the Squish series.
Here's what people are saying about Babymouse!