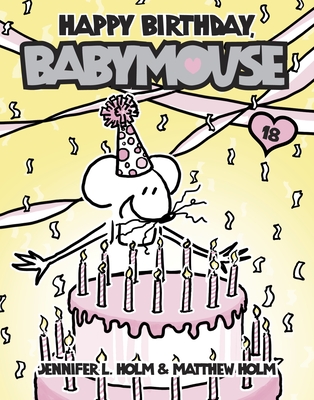 This is book number 18 in the Babymouse series.

Meet Babymouse--the spunky mouse beloved by young readers for more than a decade! You’re all invited to Babymouse’s big birthday event—and we mean BIG! Will she have the most epic birthday ever? This groundbreaking young graphic novel series, full of humor and fun, is a bestseller that’s sold more than three million copies!

You are cordially invited to the birthday event of the year! Babymouse is having a birthday and she wants it to be BIG! Mount Everest BIG. Eiffel Tower BIG. Tyrannosaurus rex BIG. (Okay, maybe inviting a T. rex isn't such a good idea). Will all of Babymouse's birthday dreams come true? Will she have a five-hundred-tier cupcake? Find out in Happy Birthday, Babymouse—the eighteenth hilarious, action-packed installment of the beloved Babymouse graphic novel series by Matthew Holm and Jennifer L. Holm!

DON'T MISS The BIG Adventures of Babymouse: Once Upon a Messy Whisker, the newest, brightest, and BIGGER THAN EVER graphic novel from BABYMOUSE!
Brother-and-sister team MATTHEW HOLM and JENNIFER L. HOLM  are big fans of birthdays (and especially birthday cake). Jennifer is the author of several novels, including three Newbery Honor winners, Our Only May Amelia, Penny from Heaven, and Turtle in Paradise. They are also the creators of the Squish series.
Here's what people are saying about Babymouse!