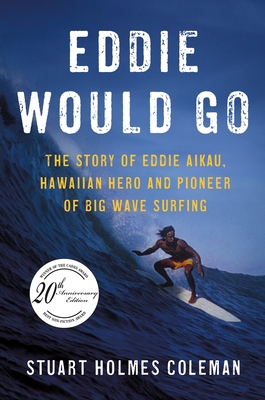 From surfer and writer Stuart Holmes Coleman, Eddie Would Go is the compelling story of Eddie Aikau's legendary life and legacy, a pipeline into the exhilarating world of surfing, and an important chronicle of the Hawaiian Renaissance and the emergence of modern Hawaii.

In the 1970s, a decade before bumper stickers and T-shirts bearing the phrase Eddie Would Go began popping up all over the Hawaiian islands and throughout the surfing world, Eddie Aikau was proving what it meant to be a "waterman." As a fearless and gifted surfer, he rode the biggest waves in the world; as the first and most famous Waimea Bay lifeguard on the North Shore, he saved hundreds of lives from its treacherous waters; and as a proud Hawaiian, he sacrificed his life to save the crew aboard the voyaging canoe Hokule'a.

Stuart Holmes Coleman moved to Hawaii in 1993 to teach, write, and surf. His essays and poems have appeared in numerous publications, including The Washington Post, USA Today, The Atlanta Review, and The Honolulu Advertiser. He is the author of Eddie Would Go: Eddie Would Go: The Story of Eddie Aikau, Hawaiian Hero and Pioneer of Big Wave Surfing and Fierce Heart: The Story of Makaha and the Soul of Hawaiian Surfing, and lives in Honolulu, Hawaii.

“A homespun homage to a modern-day folk hero...you'll see why St. Martin's decided to take Eddie nationwide--and why it's attracting loving glances from Hollywood.” —Brad Wieners, Outside Magazine

“Eddie Aikau's life is a story waiting to be told, and it could not have been told any better than in Stuart Coleman's Eddie Would Go. This is a bestseller in the same way as the The Perfect Storm.” —Peter Cole, Big-Wave Surfing Pioneer

“It's amazing the impact Eddie had on the surfing world and Hawaii. It touches the community at a real grass-roots level.” —Kelly Slater, World Champion Surfer

“A meaningful biography of a surfing hero...extraordinary.” —Terry Rogers, The San Diego Union-Tribune

“Coleman, a surfer himself, does an admirable job of de-mystifying this remarkable man.” —Terry Tomalin, The St. Petersburg Times