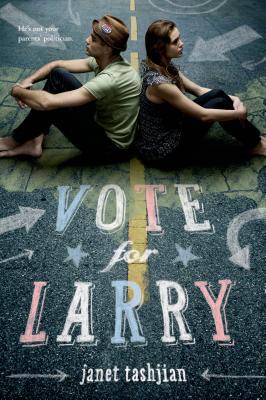 This is book number 2 in the The Larry Series series.

After becoming what he so clearly and strongly resisted—a consumer—Josh Swensen finds himself in a paranoid state of no return. That is, until he's kidnapped and coaxed into resurfacing as Larry, his old activist persona. Before long, Larry is back on the scene with much more on his mind than anti-consumerism—this time, he wants to affect change in government. And Larry isn't taking a conventional path or starting small in local government. He just doesn't do things halfway. But can he really become an eighteen-year-old president of the United States? Even if he can, is he sure he really wants to?

Janet Tashjian is a middle-grade and young adult novelist who’s been writing books for children for over two decades. Her first novel Tru Confessions was made into a critically acclaimed Disney TV movie starring Clara Bryant and Shia LaBeouf. The Gospel According to Larry series is a cult favorite and Fault Line is taught in many middle and high schools. Her bestselling My Life As a Book series is illustrated by her son, Jake. They also collaborated on the Einstein the Class Hamster series.

Janet collaborated with fellow Macmillan author Laurie Keller on the chapter book series Marty Frye, Private Eye. Janet currently lives in Los Angeles and made her new home city the setting of the Sticker Girl series, which details the adventures of Martina who overcomes being shy with the help of her magical stickers that come to life.

“[A] clever, inspiring sequel . . . Josh's narration moves swiftly, and the topical yet universal themes make this book even more compelling than the first.” —Publishers Weekly, Starred Review and Editor's Pick

“Once again, Tashjian manages to take a fairly unbelievable premise and make it seem more than fairly believable. The fast-paced story and Josh's witty narration (he still loves footnotes) will keep readers hooked--and if they get out and vote when they're eighteen, Larry will have won.” —The Horn Book Magazine

“Vote for Larry is a crash course in the rough and tumble world of national politics and teen readers will get a taste of just what it takes in idealism and courage to achieve such goals.” —Bookpage

“Hopefully Josh will return, though it is difficult to imagine what he could do after the feats he performs in this book. Enjoyable and motivational!” —teenreads.com

“Josh has a fresh, intelligent voice, filled with common sense, passion, and conviction . . . A solid and timely work that will make readers laugh, but more important, will make them think.” —Voice of Youth Advocates