Home of the Brave (Paperback) 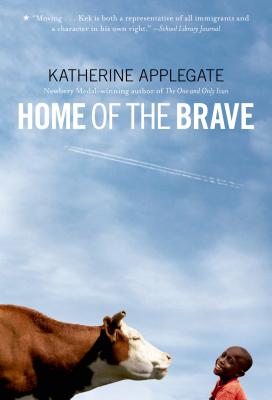 Home of the Brave (Paperback)

Bestselling author Katherine Applegate presents Home of the Brave, a beautifully wrought middle grade novel about an immigrant's journey from hardship to hope.

Kek comes from Africa. In America he sees snow for the first time, and feels its sting. He's never walked on ice, and he falls. He wonders if the people in this new place will be like the winter – cold and unkind.

In Africa, Kek lived with his mother, father, and brother. But only he and his mother have survived, and now she's missing. Kek is on his own. Slowly, he makes friends: a girl who is in foster care; an old woman who owns a rundown farm, and a cow whose name means "family" in Kek's native language. As Kek awaits word of his mother's fate, he weathers the tough Minnesota winter by finding warmth in his new friendships, strength in his memories, and belief in his new country.

Home of the Brave is a 2008 Bank Street - Best Children's Book of the Year.

Katherine Applegate is the author of several best-selling young adult series, including Animorphs and Roscoe Riley Rules. Home of the Brave, her first standalone novel, received the SCBWI 2008 Golden Kite Award for Best Fiction and the Bank Street 2008 Josette Frank Award. She lives with her family in Irvine, California.

“Beautiful. Thank you for publishing this book. Thank Katherine Applegate for writing it.” —Karen Hesse

“Moving . . . Kek is both a representative of all immigrants and a character in his own right.” —School Library Journal, Starred Review

“Precise, highly accessible language evokes a wide range of emotions and simultaneously tells an initiation story. A memorable inside view of an outsider.” —Publishers Weekly

“This beautiful story of hope and resilience . . . is an almost lyrical story.” —Voice of Youth Advocates

“The boy's first-person narrative is immediately accessible. Like Hanna Jansen's Over a Thousand Hills I Walk With You, the focus on one child gets behind those news images of streaming refugees far away.” —Booklist

“The evocative spareness of the verse narrative will appeal to poetry lovers as well as reluctant readers and ESL students.” —The Bulletin of the Center for Children's Books

“. . . beautifully written in free verse . . . a thought-provoking book about a topic sure to evoke the empathy of readers.” —KLIATT