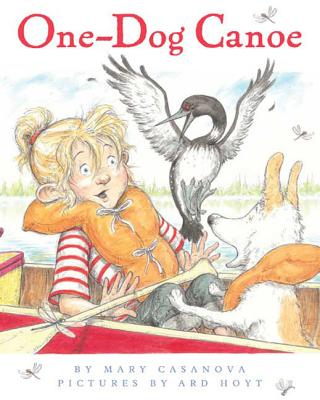 When a girl and her dog set out on a canoe trip together, they're expecting a quiet afternoon for two. Then a beaver decides to join them, even when the girl protests that "It's a one-dog canoe." And when a loon, and a wolf, and a bear, and a moose all ask for a ride, it's almost too much. But they all manage to fit in this one-dog canoe—until a frog comes along. . . .

MARY CASANOVA's books include the popular One-Dog Canoe and The Day Dirk Yeller Came to Town, both illustrated by Ard Hoyt. She lives near Ranier, Minnesota.

“A girl sets out on a canoe ride and is joined by her dog, then a variety of animal passengers. . . . Hoyt, in his children's book debut, plays with perspective . . . [while] Casanova's rhyming text employs a familiar cumulative twist as each animal requests a ride.” —Kirkus Reviews

“A lively rhyming text and wry sense of humor take a wide-eyed, ponytailed little girl and her dog on an adventurous trip down the river. . . . Their inevitable big splash will surely elicit giggles.” —School Library Journal