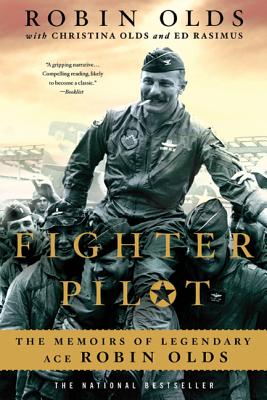 Robin Olds was a larger-than-life hero with a towering personality. A graduate of West Point and an inductee in the National College Football Hall of Fame for his All-American performance for Army, Olds was one of the toughest college football players at the time. In WWII, Olds quickly became a top fighter pilot and squadron commander by the age of 22—and an ace with 12 aerial victories.

But it was in Vietnam where the man became a legend. He arrived in 1966 to find a dejected group of pilots and motivated them by placing himself on the flight schedule under officers junior to himself, then challenging them to train him properly because he would soon be leading them. Proving he wasn't a WWII retread, he led the wing with aggressiveness, scoring another four confirmed kills, becoming a rare triple ace.

Olds, who retired a brigadier general and died in 2007, was a unique individual whose personal story presents one of the most eagerly anticipated military books in recent memory.

Christina Olds is the daughter of Robin Olds, a legendary U.S. Air Force fighter pilot in WWII and the Vietnam War. She holds a B.A. in English and creative writing from Vassar.

Robin Olds (1922-2007) was a U.S. Air Force fighter pilot. A triple ace, he achieved a combined total of 16 victories in the Second World War and the Vietnam War. Born into an army family in Honolulu and raised in Virginia, he was educated at West Point, where he was an All American football player. He fought in Europe during World War II, and was regarded as the best wing commander in the Vietnam War. He was promoted to brigadier general after Vietnam, and also served as Commandant of Cadets at the U.S. Air Force Academy. His memoir, Fighter Pilot, was published by St. Martin's Press in 2010. Olds' daughter, Christina Olds, who holds a B.A. in creative writing from Vassar, compiled his writings with Ed Rasimus, a retired USAF fighter pilot whose books on the Vietnam air war include When Thunder Rolled and Palace Cobra.

Ed Rasimus is a retired USAF fighter pilot whose books on the Vietnam air war include When Thunder Rolled and Palace Cobra. He flew more than 250 combat missions during the Vietnam War in F-105s and F-4s, earning the Silver Star, five Distinguished Flying Crosses and 20 air medals. He lives in Whitesboro, Texas.

“A gripping narrative...Compelling reading, likely to become a classic.” —Booklist

“Robin Olds is probably the greatest aerial warrior America ever produced. His autobiography tells it like it was...and provides written proof why the people who served with him made him a legend. This book will be an instant classic.” —Stephen Coonts, New York Times bestselling author of The Assassin

“One man's account of war and, in its way, a tribute to a vanished breed of men.” —The Wall Street Journal