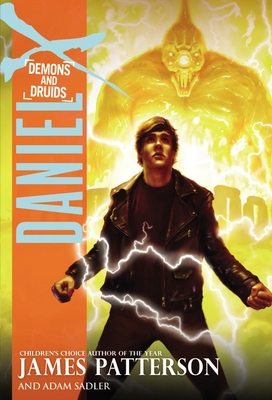 This is book number 3 in the Daniel X series.

Daniel X is on an impossible mission: to eliminate every intergalactic criminal. But with an explosive demon ready to destroy the Earth, he must travel back in time for his greatest challenge yet.
Using his incredible superpower to create objects out of thin air, Daniel X has taken on some of the most fearsome and fiendish aliens in the universe, and now he's aiming to extinguish his next target: the explosive demon of fir, Phosphorius Beta, and his army of flame-weaving henchmen.
But it's going to take a whole new level of mojo to destroy this villain. Beta's strength has been growing since he arrived on Earth over a millennium ago, and he's finally ready to turn the blue planet into his own fiery wasteland. The only way to stop him is by jumping back in time to the Dark Ages to end Beta's blistering reign before it has a chance to begin. But can Daniel X take the heat? Or will the alien hunter finally get burned?

James Patterson has had more New York Times bestsellers than any other writer, ever, according to Guinness World Records. Since his first novel won the Edgar Award in 1977 James Patterson's books have sold more than 300 million copies. He is the author of the Alex Cross novels, the most popular detective series of the past twenty-five years, including Kiss the Girls and Along Came a Spider. He writes full-time and lives in Florida with his family.