The Swan Thieves: A Novel (Paperback) 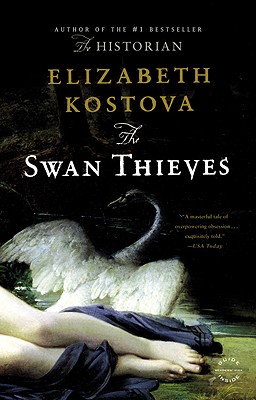 “The Swan Thieves skillfully blends the worlds of art, psychology, history, and mythology with myriad voices to create a compelling tale of love, obsession, and human nature. Add a dash of mystery, and you have a thoroughly satisfying read.”
— Sue Beale, Nicola's Books, Ann Arbor, MI

Psychiatrist Andrew Marlow, devoted to his profession and the painting hobby he loves, has a solitary but ordered life. When renowned painter Robert Oliver attacks a canvas in the National Gallery of Art and becomes his patient, Marlow finds that order destroyed. Desperate to understand the secret that torments the genius, he embarks on a journey that leads him into the lives of the women closest to Oliver and a tragedy at the heart of French Impressionism.

Kostova's masterful new novel travels from American cities to the coast of Normandy, from the late 19th century to the late 20th, from young love to last love. The Swan Theives is a story of obsession, history's losses, and the power of art to preserve human hope.

Elizabeth Kostova is the author of the international bestseller The Historian. She graduated from Yale and holds an MFA from the University of Michigan, where she won the Hopwood Award for the Novel-in-Progress.

"The many ardent admirers of The Historian will be happy to learn that The Swan Thieves offers plenty of the same pleasures." —Washington Post

"A must-read for lovers of historical fiction....The Swan Thieves shows the same meticulous historical research and scene-setting description that elevated The Historian from a vampire tale to a work of art." —Associated Press

"A compelling story....Fans of The Historian have been waiting a long time for a new work from Kostova. They won't be disappointed." —Denver Post

"Kostova's eloquent prose possesses the power to both transport and inspire." —BookPage

"Kostova knows how to craft a breathless ending." —Entertainment Weekly