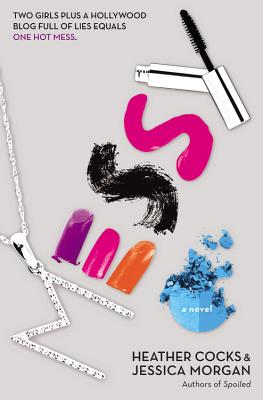 
Ships to Our Store in 1-5 Days
Sometimes life gets Messy.
When sixteen-year-old Brooke Berlin catches a taste of fame and her movie-star father's attention, she decides it's time to take her career to the next level--by launching a blog that will position her as a Hollywood "It Girl" who tells it like it is. But between schoolwork, shopping, and spray-tan appointments, she hardly has the time to write it herself...
Enter green-haired outsider Max McCormack, an aspiring author with a terrible after-school job pushing faux meat on the macrobiotic masses. Max loathes the celebrity scene almost as much as she dislikes Brooke, but wooed by an impressive salary, Max reluctantly agrees to play Brooke's ghost-blogger -- and the site takes off. How long will their lie last? Can the girls work together to stay on top, or will the truth come out and ruin everything they've built?
Along with an entourage of fame-hungry starlets, scruffy rocker wannabes, and sushi-scarfing socialites, the case of Heather Cocks and Jessica Morgan's dazzling debut, Spoiled, are back for another adventure in Tinseltown.
Heather Cocks is a die-hard sports fan, a Leo, an ex-reporter, a Notre Dame grad, a dual citizen of the U.S. and U.K., a sandwich enthusiast, and a former producer for America's Next Top Model. Jessica Morgan is a Southern California native and UCLA alumna who has produced reality shows ranging from Growing Up Gotti to the docu-series 30 Days. She collects shoes, books, and unpaid parking tickets. Both ladies live in Los Angeles, California and watch almost everything on the CW.

Together, Heather and Jessica skewer celebrity fashion crimes on their popular blog, Go Fug Yourself, which draws millions of monthly readers and made Entertainment Weekly's Must List. Their dispatches from the front rows are routinely the most-read pieces on New York magazine's Web site during Fashion Week. Messy is the sequel to Spoiled, and this is their second novel for young adults.
"I love the way Heather and Jessica write. They're so funny, and so fashion-y, which is incredibly rare."—Mindy Kaling, Emmy-nominated writer, actress, and New York Times bestselling author of Is Everyone Hanging Out Without Me? (And Other Concerns)

"This companion novel to Spoiled is a treat.... there are enough witty observations and laugh-out-loud lines to make this about as much fun as you can have reading a book... an engaging, well-plotted story."—VOYA

"Satirizing Hollywood is a time-honored literary pastime, but timely satirical touches keep things fresh...For most of the lowlife celebrities skewered, fame will be justly fleeting, but this novel should have a longer shelf life, thanks to a cast of complex characters who offer ample evidence that, F. Scott Fitzgerald notwithstanding, the rich and famous are like you and me."—Kirkus

"This engaging, entertaining follow-up companion to Spoiled (2011) features plenty of snark, style, and Hollywood-centric satire, but also sympathy for the girls as they navigate familiar issues like wanting parental approval and pursuing their dreams."—Booklist

"This story of hidden identities and love triangles is a fun and fast read... All of the characters have well-developed personalities, and teens will want to be along for any future adventures."—SLJ

"Spoiled is soapy, funny and full of the Fug Girls' trademark Hollywood snark. I want to read the sequel NOW."—Megan McCafferty, New York Times bestselling author of Bumped and the Jessica Darling series