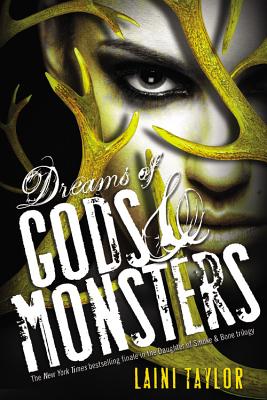 This is book number 3 in the Daughter of Smoke & Bone series.

What power can bruise the sky?
Two worlds are poised on the brink of a vicious war. By way of a staggering deception, Karou has taken control of the chimaera's rebellion and is intent on steering its course away from dead-end vengeance. The future rests on her.
When the brutal angel emperor brings his army to the human world, Karou and Akiva are finally reunited--not in love, but in tentative alliance against their common enemy. It is a twisted version of their long-ago dream, and they begin to hope that it might forge a way forward for their people. And, perhaps, for themselves.
But with even bigger threats on the horizon, are Karou and Akiva strong enough to stand among the gods and monsters?
The New York Times bestselling Daughter of Smoke & Bone trilogy comes to a stunning conclusion as--from the streets of Rome to the caves of the Kirin and beyond--humans, chimaera, and seraphim strive, love, and die in an epic theater that transcends good and evil, right and wrong, friend and enemy.
Laini Taylor is the New York Times bestselling author of the Printz Honor Book Strange the Dreamer and its sequel, Muse of Nightmares. Taylor is also the author of the global sensation the Daughter of Smoke & Bone trilogy and the companion novella Night of Cake & Puppets. Taylor's other works include the Dreamdark books: Blackbringer and Silksinger, and the National Book Award finalist Lips Touch: Three Times. She lives in Portland, Oregon, with her husband, illustrator Jim Di Bartolo, and their daughter, Clementine. Her website is lainitaylor.com.
An Amazon Best Book of the Year

*In the final book of the Daughter of Smoke & Bone trilogy, Taylor revives the strong interweaving of reality and fantasy that gave the first story such cross-genre appeal."—Publishers Weekly, starred review

*"The conclusion promises resurrection, renewal, and long-postponed love happily resolved, and that should satisfy even the most meticulous fans."—School Library Journal (starred review)

*"Though readers will be loath to leave this world behind, the trilogy ends with a sweet buffet of just deserts; the best balm for the bereft may be to start the series again from the beginning."—The Bulletin (starred review)

"[An] ambitious, gorgeously edgy drama lit up by its coruscating characters and prose."—Kirkus

"For all the well-made trappings of fantasy and horror, the patchwork amalgamation of myth and legend, the machinations of plot, and the colorful menagerie of ensemble characters, this story remains, at heart, a romance-clear-eyed, tender, and satisfying."—The Horn Book