Middle School: My Brother Is a Big, Fat Liar (Hardcover) 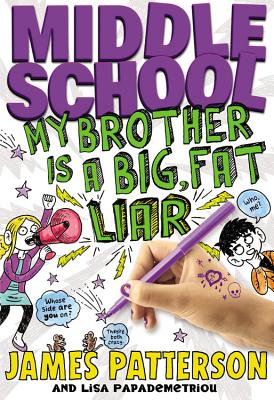 Middle School: My Brother Is a Big, Fat Liar (Hardcover)

This is book number 3 in the Middle School series.

Georgia Khatchadorian-the sister of Rafe, the star of the first two Middle School books-plans to excel at Hills Village Middle School in all the places her troublemaking brother failed. She's even bet him that she'll quickly become one of the most popular girls in school, but no one will give her a chance!

Even worse, Rafe has sneakily set her up to embarrass herself in front of the snooty "Princesses" who run the school and the boy who's caught her eye. Will she be able to overcome her fears and win her bet with Rafe? Find out THE TRUTH about Rafe Khatchadorian's sister in the first Middle School story from the point of view of the hilarious Georgia-a girl who's ready to speak her mind!

James Patterson has had more New York Times bestsellers than any other writer, ever, according to Guinness World Records. Since his first novel won the Edgar Award in 1977 James Patterson's books have sold more than 300 million copies. He is the author of the Alex Cross novels, the most popular detective series of the past twenty-five years, including Kiss the Girls and Along Came a Spider. He writes full-time and lives in Florida with his family.