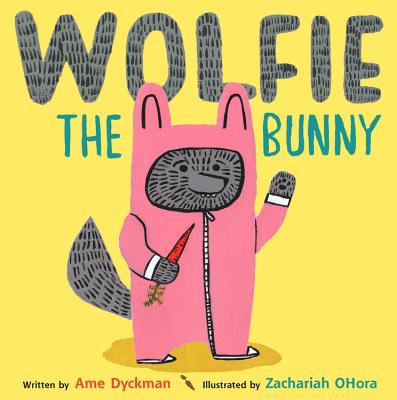 
Ships to Our Store in 1-5 Days
Families of all kinds will delight in this sweet tale of new babies, sibling rivalry, bravery, unconditional love...and veggies!

The Bunny family has adopted a wolf son, and daughter Dot is the only one who realizes Wolfie can--and might--eat them all up! Dot tries to get through to her parents, but they are too smitten to listen. A new brother takes getting used to, and when (in a twist of fate) it's Wolfie who's threatened, can Dot save the day?
Ame Dyckman is the award-winning author of That's Life!, Dandy, Read the Book, Lemmings!, You Don't Want a Unicorn!, Horrible Bear!, the New York Times Bestselling Wolfie the Bunny, and more. Ame lives in New Jersey with her family, pets, and hair bow collection. You can visit Ame on Twitter (@AmeDyckman).

Zachariah OHora is the illustrator of a number of children's books, including Wolfie the Bunny and Read the Book, Lemmings! (both written by Ame Dyckman). His author-illustrator debut Stop Snoring, Bernard! was awarded the Society of Illustrators Founder's Award, and his book No Fits Nilson! was the Huffington Post Best Picture Book of the Year for 2013. He lives and works in Narberth, PA.
A Bank Street College Best Children's Book of 2016Parents Magazine Best Fictional Picture Book 2015ASLC Notable Book for Children SLJ Best of the YearNYPL 100 Titles for Reading and SharingThe Huffington Post Best Picture Books 2015Wilde Award Best Picture Books Ages 4-8

* "The text is seamlessly integrated with the illustrations and uses various fonts to good effect. OHora's acrylic paintings are the heart of this tale. They clearly show everyone's feelings from fear to sadness to joy to anger to love and everything in between, and there are brilliant bits of humor and whimsy added to the mix. VERDICT: A great book for one-on-one sharing that's also sure to be a storytime hit."—SLJ, starred review

* "This gets all the elements of the successful picture book just right: a familiar scenario (sibling rivalry), a scary adversary, a display of courage, and a happy ending. And then there's the art!...A crowd-pleaser for crowds big and small."—Booklist, starred review

* "Dyckman's (Tea Party Rules) rousing, warmhearted story opens as a family of city-dwelling bunnies discover a wolf cub in a basket on their front stoop. "He's going to eat us all up!" cries daughter Dot. But Papa proudly snaps pictures of Wolfie chowing down on carrots ("He's a good eater!"), and Mama's smitten, too. OHora's (Tyrannosaurus Wrecks!) distinctive folk-naif spreads poke gentle fun at hipster families--Papa and Mama are decked out in cardigans and argyle, while Dot and Wolfie shop at a food coop selling such wares as locally-sourced bamboo. More laughs come from the irresistible contrast between Dot's sweet bunny countenance and her furious glares of rage. "I knew it!" she hisses when Wolfie bares his fangs while they're shopping. But he's not baring them at Dot--he's worried about the huge bear behind her. In a gratifying showdown, Dot overpowers the bear ("Let him go!" she yells. "Or...I'll eat you all up!") while Wolfie proves he's not only trustworthy but full of love."—Publishers Weekly, starred review

"The first fresh twist on new-baby angst I've seen in years...The text is pitch-perfect, and the art is its match."—Chicago Tribune