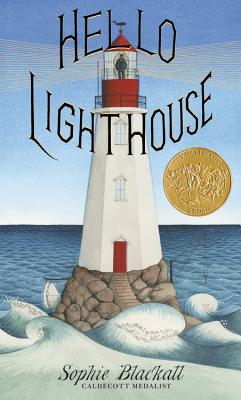 “Sophie Blackall is one of my favorite illustrators - her style is so charming, it makes my heart full every time I see her delicately rendered characters and the love they have for each other. The story of the lighthouse caretaker is so sweet and soulful, with a rhythmic recounting that plays up the wonder and magic of the ordinary. Her patterns and textures are incredible, her color palettes are always perfect, and her waves remind me of why I love the water!”
— Tomoko Bason, Book People Bookstore, Austin, TX

A beloved picture book from two-time Caldecott Medal award-winner Sophie Blackall that transports readers to the seaside in timeless, nautical splendor! Watch the days and seasons pass as the wind blows, the fog rolls in, and icebergs drift by. Outside, there is water all around. Inside, the daily life of a lighthouse keeper and his family unfolds as the keeper boils water for tea, lights the lamp's wick, and writes every detail in his logbook.

Step back in time and through the door of this iconic lighthouse into a cozy dollhouse-like interior with the extraordinary award-winning artist Sophie Blackall.
Sophie Blackall is the bestselling and Caldecott medal-winning artist behind Finding Winnie: The True Story of the World's Most Famous Bear. Her work has appeared in the bestselling Ivy and Bean series, many award-winning picture books, a global pro-vaccination campaign, and on a renowned NYC subway poster. She lives in Brooklyn with her family.
Praise and accolades for Hello Lighthouse:An IndieBound BestsellerAn Amazon Best Book of the Year So Far

"I will be surprised if a more exquisite picture book will be published this year...Children will be fascinated..."—New York Times Book Review

* "Blackall's charmingly old-fashioned art style is beautifully matched to this nostalgia-rich story, which imbues an antiquated place with warmth and wonder."—Booklist, starred review

* "A delightful bedtime read perfect for one on one sharing."—School Library Journal, starred review

* "It's a jewel of a creation and a gift to those who dream of retreat."—Publishers Weekly, starred review

* "A fascinating, splendidly executed peek into both the mundane and the dramatic aspects of lighthouse life."—Kirkus Reviews, starred review

"Blackall's accomplished illustrations are a mix of homey detail and spectacular scenery."—Horn Book

*"The sum total is as captivating as it is informative, transforming a personal family story into something universally resonant."—Horn Book (Starred Review)

*"Little ones who love Milne's classic stories will be enchanted by this heartening account of the bear's real-life origins."—Booklist (Starred Review)