It Ends in Fire (Paperback) 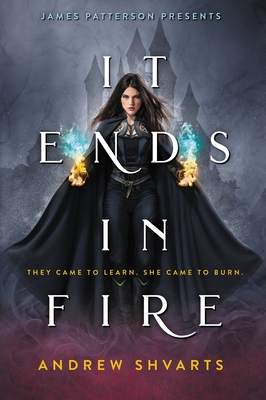 It Ends in Fire (Paperback)

Only those from the most powerful magical families can attend Blackwater Academy, but new student Alka has them fooled. Now it's time to take down the oppressive wizard ruling class from the inside. Alka Chelrazi is on a mission:
1. Infiltrate Blackwater Academy
2. Win the Great Game
3. Burn Wizard society to the ground  As a child, Alka witnessed her parents' brutal murder at the hands of Wizards before she was taken in by an underground rebel group. Now, Alka is deep undercover at the most prestigious school of magic in the Republic: Blackwater Academy, a place where status is everything, where decadent galas end in blood-splattered duels, where every student has their own agenda. To survive, Alka will have to lie, cheat, kill, and use every trick in her spy's toolkit. And for the first time in her life, the fiercely independent Alka will have to make friends in order to recruit the misfits and the outcasts into her motley rebellion.

But even as she draws closer to victory—to vengeance—she sinks deeper into danger as suspicious professors and murderous rivals seek the traitor in their midst, as dark revelations unravel her resolve. Can Alka destroy the twisted game...without becoming a part of it?
Andrew Shvarts is the author of the Royal Bastards trilogy. He has a BA in English Literature and Russian from Vassar College. He works for Pixelberry Studios, making mobile games like High School Story, Choices, and more. Andrew lives in San Jose, California, with his wife, son, and two cats.
"Vicious, insightful, bloody; Andrew Shvarts knows exactly what he's doing."—#1 New York Times bestselling author E.K. Johnston

"Grabs you by the throat and never lets go. Dark and deep, this book demands to be read in one great, gasping gulp.—Beth Revis, New York Times bestselling author of Give the Dark My Love

"An exciting, enticing adventure full of revenge and magic that takes a refreshing and nuanced look into power dynamics."—Tara Sim, author of Scavenge the Stars

"An addictive and invigorating tale of romance, revenge, and rebellion. Alka Chelrazi is a heroine I'd gladly follow to the ends of the earth."—Dahlia Adler, editor of His Hideous Heart

"There is much violence here, yet there is also tenderness, loyalty, and a protagonist who manages to acknowledge who she is and take a stand for what truly matters.... Older teens who enjoy imperfect heroes in realms where magic creates as many problems as it solves will relate to this story immensely."—SLJ

"Shvarts has effectively built a world where sexuality is fluid and diversity is well integrated."—BCCB

"A fun and quick-paced story that will engage and challenge readers."—The Seattle Times

"In between chapters, Alka reveals her character through flashbacks of her hard life, making her the hero that fantasy fiction is waiting for. It’s a must read for fans of Shvarts’ Royal Bastards series."—San Francisco Book Review