The Martyr (The Covenant of Steel #2) (Paperback) 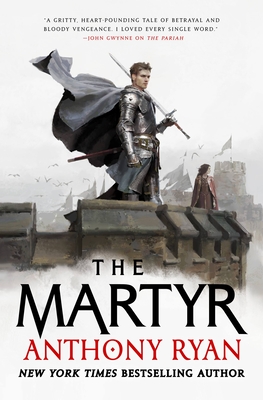 The Martyr (The Covenant of Steel #2) (Paperback)

This is book number 2 in the The Covenant of Steel series.

Deadly feuds and ancient secrets spell war in the second novel of The Covenant of Steel, an epic series of action, intrigue, and magic from Anthony Ryan, a master storyteller who has taken the fantasy world by storm.

"Ryan again showcases his gift for epic fantasy in his excellent sequel to The Pariah . . . . Ryan's evocative prose enhances the suspenseful, intricate story . . . .This fires on all cylinders." —Publishers Weekly (starred review)

Times have changed for Alwyn Scribe. Once an outlaw, he’s now a spymaster and sworn protector of Lady Evadine Courlain, whose visions of a demonic apocalypse have earned her the fanatical devotion of the faithful.

Yet Evadine’s growing fame has put her at odds with both Crown and Covenant. As trouble brews in the kingdom, both seek to exploit her position for their own ends.

Sent to the Duchy of Alundia to put down a rebellion, Alwyn must rely on old instincts to fight for his new cause. Deadly feuds and ancient secrets are laid bare as war erupts, a war that will decide the fate of the Kingdom of Albermaine and, perhaps, prevent the coming of the prophesied Second Scourge.

"A gritty, heart-pounding tale of betrayal and bloody vengeance. I loved every single word." — John Gwynne on The Pariah

For more from Anthony Ryan, check out:
The Covenant of Steel
The Pariah
The Martyr

Anthony Ryan lives in London and is the New York Times bestselling author of the Raven's Shadow and Draconis Memoria series. He previously worked in a variety of roles for the UK government, but now writes full time. His interests include art, science and the unending quest for the perfect pint of real ale.

"Ryan again showcases his gift for epic fantasy in his excellent sequel to The Pariah . . . . Ryan’s evocative prose enhances the suspenseful, intricate story, and the cliffhanger ending will have fans counting the days until the next volume. This fires on all cylinders."—Publishers Weekly (starred review)

“Gritty and well-drawn, this makes a rich treat for George R.R. Martin fans.”—Publishers Weekly (starred review) on The Pariah

"A gritty, heart-pounding tale of betrayal and bloody vengeance. I loved every single word."—John Gwynne on The Pariah

"A master storyteller."—Mark Lawrence on The Pariah

“In The Pariah Ryan creates a wonderfully slow burn and a protagonist who resonates in spite of – or because of — his flaws. I loved wandering with Alwyn from one scrape to the next, and I’m ready for more.”—Django Wexler on The Pariah

"The Pariah is Anthony Ryan at his best. A fast-paced, brutal fantasy novel with larger than life characters and a plot full of intrigue and suspense. With bloody twists and turns aplenty, this novel is destined to become a favorite of the grimdark community."—Grimdark Magazine on The Pariah

"Fans of broadscale epic fantasy along the lines of Robert Jordan's Wheel of Time series and George R. R. Martin's Song of Ice and Fire novels should find this debut much to their liking."—Library Journal on Blood Song

"[Blood Song] certainly has it all: great coming-of-age tale, compelling character and a fast-paced plot. If [Ryan's] first book is any indication of things to come, then all fantasy readers should rejoice."—Michael J. Sullivan on Blood Song

"Readers who enjoy their fantasy fast and furious will find Ryan's latest to be an immensely satisfying, top-notch adventure fantasy."—Kirkus on Wolf's Call