Blood of Elves (The Witcher #3) (Hardcover) 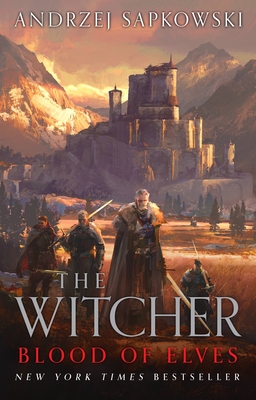 Blood of Elves (The Witcher #3) (Hardcover)

This is book number 3 in the The Witcher series.

For over a century, humans, dwarves, gnomes, and elves have lived together in relative peace. But that peace has now come to an end.

Geralt of Rivia, the hunter known as the Witcher, has been waiting for the birth of a prophesied child. The one who has the power to change the world for good—or for evil.

As the threat of war hangs over the land and the child is pursued for her extraordinary powers, it will become Geralt’s responsibility to protect them all. And the Witcher never accepts defeat.

Join Geralt of Rivia; his beloved ward and the child of prophecy, Ciri; and his ally and love, the powerful sorceress Yennefer as they battle monsters, demons, and prejudices alike in Blood of Elves, the first novel of The Witcher Saga.

Andrzej Sapkowski was born in 1948 in Poland. He studied economy and business, but the success of his fantasy cycle about the Witcher Geralt of Rivia turned him into a bestselling writer. His work has received Poland’s Janusz A. Zajdel prize five times, as well as Great Britain’s David Gemmell Award for Fantasy, in 2009. In 2016, he received the World Fantasy Award—Life Achievement. The Witcher has been adapted to a successful video-game franchise, and is now a series on Netflix.

"This is a series you can sink your teeth into."—BuzzFeed News

"Delightful, intense, irreverent, and compelling....you have to read The Witcher books because they are rife with all of the elements that make you love fiction, and especially fantasy, in the first place....In a word, The Witcher delivers."—Hypable

"One of the best and most interesting fantasy series I've ever read."—Nerds of a Feather

"Like Mieville and Gaiman, [Sapkowski] takes the old and makes it new."—Foundation

"Sapkowski has a confident and rich voice which permeates the prose and remains post-translation. I'd recommend this to any fan of heroic or dark fiction."—SF Book Reviews