Hold On to Your Music: The Inspiring True Story of the Children of Willesden Lane (Hardcover) 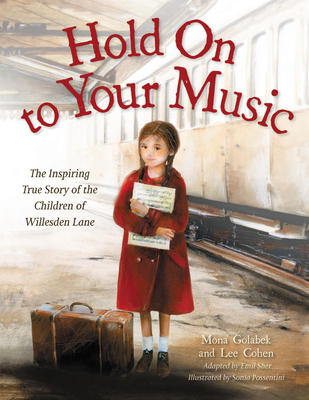 Hold On to Your Music: The Inspiring True Story of the Children of Willesden Lane (Hardcover)


Ships to Our Store in 1-5 Days
Discover the inspiring illustrated true story about one girl's escape from the Holocaust to become a concert pianist against all odds, made popular by the beloved novel The Children of Willesden Lane.

In pre-World War II Vienna, Lisa Jura was a musical prodigy who dreamed of becoming a concert pianist. But when enemy forces threatened the city—particularly the Jewish people that lived there—Lisa's parents were forced to make a difficult decision. They chose to send Lisa to London for safety through the Kindertransport—a rescue effort that relocated Jewish children. As Lisa yearned to be reunited with her family while living in a home for refugee children on Willesden Lane, her music became a beacon of hope for those around her.

A true story of courage, survival, and determination, this compelling tribute to a gifted young girl has already touched the lives of many around the world. Originally published in 2017 for older readers, The Children of Willesden Lane has sold hundreds of thousands of copies globally; now this picture book retelling will inspire a new generation.
Mona Golabek is a Grammy-nominated recording artist, internationally celebrated concert pianist, star of the one-woman show The Pianist of Willesden Lane, and author of The Children of Willesden Lane. She has traveled the globe sharing her mother's inspirational message. This story will soon be a major motion picture.
Lee Cohen is a journalist, screenwriter, and poet.
Emil Sher is an author and playwright living in Toronto.
Sonia Possentini is a fine artist and illustrator living in Modena, Italy.
"A must-share snapshot of history that invites young readers to consider what they will hold on to when they face difficult times."—School Library Journal

"This book will work well in any classroom conversation about bravery in the face of discrimination and prejudice."—School Library Connection