Some Shall Break (The None Shall Sleep Sequence #2) (Hardcover) 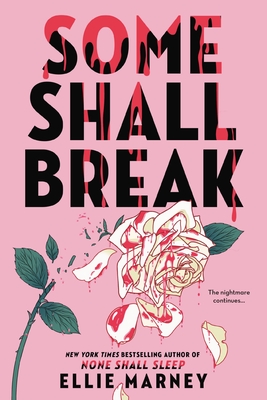 Some Shall Break (The None Shall Sleep Sequence #2) (Hardcover)

This is book number 2 in the The None Shall Sleep Sequence series.

This sequel to the New York Times bestselling None Shall Sleep is an equally electrifying, chilling thriller that brings us back into the lives of junior FBI consultants Travis Bell and Emma Lewis with a new case that may unravel everything they’ve been working for.

After a harrowingly close contact with juvenile sociopath Simon Gutmunsson, junior FBI consultants Emma Lewis and Travis Bell went their separate ways: Emma rejected her Quantico offer and Travis stayed to train within a new unit of the FBI Behavioral Science division. But the unit’s latest case is feeling eerily familiar and Kristin Gutmunsson—Simon Gutmunsson’s eccentric twin—reaches out to Travis to send a warning: Emma is in peril.

When Travis and Kristin turn up evidence that points back to Daniel Huxton, the serial killer that Emma had escaped, things become more complicated. With a copycat on the loose, Emma returns to Quantico and is thrown back into her past traumas. Compelled to prevent more tragedy—even if it means putting herself in danger—Emma turns to Simon for help once again. But Simon is keeping secrets that could impact their entire investigation. Will the team be able to stop the Huxton copycat before time runs out for his next victims?
Ellie Marney is an author of crime thrillers. Her titles include the New York Times bestselling None Shall Sleep, The Killing Code, White Night, the Every series and the companion novel No Limits, and the Circus Hearts series. Her books are published in ten countries, and have been optioned for television. She’s spent a lifetime researching in mortuaries, talking to autopsy specialists, and asking former spies about how to make explosives from household items, and now she lives quite sedately in southeastern Australia with her family.

Praise for None Shall Sleep:

"A YA Silence of the Lambs that blew me away with its daring premise, gripped me with its twists and turns, and kept me up all night until its stunning conclusion. Ellie Marney brings the serial killer thriller to YA with riveting suspense and sizzling style. Don't read this book in the dark!"—C.S. Pacat, USA Today bestselling author of Fence

"Marney has created a thrilling cat-and-mouse story in this taut, Silence of the Lambs-like thriller.... Marney also skillfully creates engaging and complex characters as well as a budding romance that tenderly juxtaposes the overarching plot."—Publishers Weekly

“An edge-of-your-seat thriller and taut psychological study, Some Shall Break takes you on a terrifying journey as it dives into the heart of its hero and its villain. This is a sequel that will have you screaming for more!”—C.S. Pacat, New York Times bestselling author of Dark Rise