Trouble Is What I Do (Leonid McGill) (Paperback) 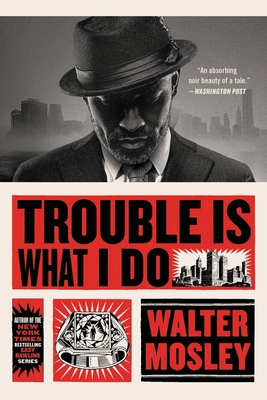 Trouble Is What I Do (Leonid McGill) (Paperback)

Morally ambiguous P.I. Leonid McGill is back -- and investigating crimes against society's most downtrodden -- in this installment of the beloved detective series from an Edgar Award-winning and bestselling crime novelist.

Leonid McGill's spent a lifetime building up his reputation in the New York investigative scene. His seemingly infallible instinct and inside knowledge of the crime world make him the ideal man to help when Phillip Worry comes knocking.

Phillip "Catfish" Worry is a 92-year-old Mississippi bluesman who needs Leonid's help with a simple task: deliver a letter revealing the black lineage of a wealthy heiress and her corrupt father. Unsurprisingly, the opportunity to do a simple favor while shocking the prevailing elite is too much for Leonid to resist.

But when a famed and feared assassin puts a hit on Catfish, Leonid has no choice but to confront the ghost of his own felonious past. Working to protect his client and his own family, Leonid must reach the heiress on the eve of her wedding before her powerful father kills those who hold their family's secret.

Joined by a team of young and tough aspiring investigators, Leonid must gain the trust of wary socialites, outsmart vengeful thugs, and, above all, serve the truth -- no matter the cost.

Walter Mosley is one of America's most celebrated and beloved writers. A Grand Master of the Mystery Writers of America, he has won numerous awards, including an Edgar Award for best novel, the Anisfield-Wolf Award, a Grammy, a PEN USA's Lifetime Achievement Award, and several NAACP Image awards.
His books have been translated into more than twenty languages. His short fiction has appeared in a wide array of publications, including the New Yorker, GQ, Esquire, Los Angeles Times Magazine, and Playboy, and his nonfiction has been published in the New York Times Book Review, the New York Times Magazine, Newsweek, and the Nation. He is the author of the acclaimed Easy Rawlins series, including most recently Charcoal Joe. He lives in New York City.
"This gifted raconteur of the African American experience has produced an absorbing noir beauty of a tale."—Richard Lipez, The Washington Post

"A slim volume with the feel of a fable and the concision of a blues scale. Minor characters have marvelous names-Archibald Lawless, Dido Kazz, Mozelle Tot-and move with ageless grace. 'I felt a kinship to all of them,' Leonid thinks. So do we."—Tom Nolan, Wall Street Journal

"The charms of this short novel lie in Mosley's memorable characters, his portrayal of the world McGill inhabits and the author's uniquely lyrical writing style."—Bruce DeSilva, Associated Press

"A tight and quietly subversive tale about family, class, privilege, and race (plus honor, of all things) that packs a hard tight punch. You won't see it coming, but you'll know when it lands."—Kevin Burton Smith, Mystery Scene Magazine

"[Mosley] wanders through a few underworlds of the New York City crime category, always a treat for readers, and one that packs a moral punch. Mosley is, quite simply, an icon of detective fiction, and with each new novel in the McGill series he's making New York noir his own just as he did with Los Angeles."—LitHub

"Spieled in a powerful, streamlined voice, this wrenching American noir will stick with readers long after the final page."—Booklist

"Watching McGill coolly deploy the physical and intellectual skills he'd acquired in his previous life as an underworld "fixer" provides the principal pleasure of this installment, along with Mosley's own way of making prose sound like a tender, funny blues ballad...Mosley delivers enough good stuff to let you know a master's at work."—Kirkus