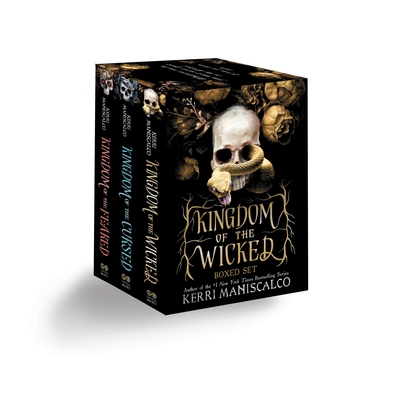 Two sisters.
One brutal murder.
A quest for vengeance that will unleash Hell itself...

And an intoxicating romance.

Emilia and her twin sister Vittoria are streghe -- witches who live secretly among humans, avoiding notice and persecution. One night, Vittoria misses dinner service at the family's renowned Sicilian restaurant. Emilia soon finds the body of her beloved twin...desecrated beyond belief. Devastated, Emilia sets out to find her sister's killer and to seek vengeance at any cost -- even if it means using dark magic that's been long forbidden.

Then Emilia meets Wrath, one of the Wicked princes of Hell she has been warned against in tales since she was a child. Wrath claims to be on Emilia's side, tasked by his master with solving the series of women's murders on the island. But when it comes to the Wicked, nothing is as it seems...

With nonstop action, sizzling romance, and unpredictable twists, this blockbuster series and its "page-turning plot is a force to be reckoned with" (Booklist).
Kerri Maniscalco grew up in a semi-haunted house outside New York City, where her fascination with gothic settings began. In her spare time she reads everything she can get her hands on, cooks all kinds of food with her family and friends, and drinks entirely too much tea while discussing life's finer points with her cats. She is the author of the #1 New York Times bestselling Stalking Jack the Ripperquartet and Kingdom of the Wicked series.
#1 on The New York Times children’s series—NYT