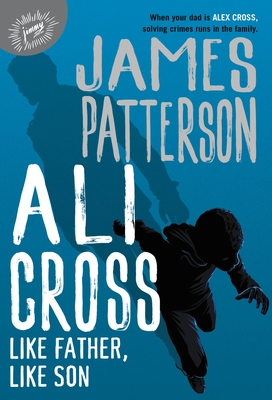 This is book number 2 in the Ali Cross series.

Alex Cross’s son Ali is an accomplished mystery-solver and #1 bestseller. A crime at a concert near his school sparks his newest investigation, and it gets dangerous fast. Sometimes it’s good to have a father in the detective business.
​

Alex Cross knows it's only a matter of time before his son finds his way into more trouble.

Neither of them expected Ali to get caught up in another case so quickly.

Ali and his friends were just hanging out in Anacostia Park . . . then they became witnesses to a crime.

Alex wants Ali to stay far away from the investigation. But Ali isn't going anywhere, not when his new friend Zoe is in trouble. It's up to Ali to figure out why she's lying to the police—and who she's protecting.

This is Ali's toughest case yet. As long as he trusts his Cross instincts, he may just have a shot at solving it . . .
James Patterson is the world's bestselling author. The creator of Max Einstein and Middle School, he founded JIMMY Patterson to publish books that young readers will love. He lives in Florida with his family.
Praise for Ali Cross: Like Father, Like Son:

“This one will fly off the shelves.”—Booklist

"The prolific king of the beach read is back with an intergenerational mystery for the 9-to-12-year-old set."—Kirkus Reviews

"All Patterson's success stems from one simple root: his love of telling stories."—The Washington Post

"Patterson's fans...aren't just addicted to his books; they see him as a constant companion, a part of their lives."—The New York Times

"Patterson is in a class by himself."—Vanity Fair

"Young readers...will find much to like in this first installment. There are highlights in Ali's first case, such as creatively using an immersive video game environment the preteens are addicted to as a way to communicate."—Booklist

"This is a fresh look at the world of James Patterson's most famous protagonist."—School Library Journal

"Alex Cross is a legend."—Harlan Coben