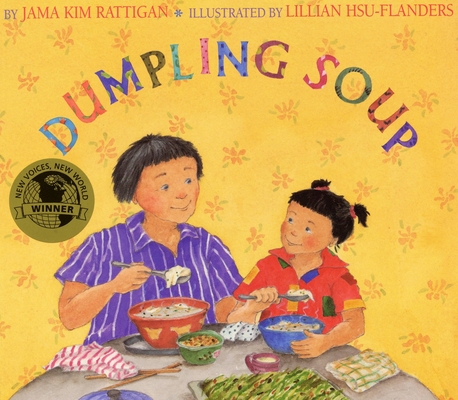 
Ships to Our Store in 1-5 Days
The food and family love are equally warm in this gorgeously illustrated and delicious tale that celebrates mixed families.

Marisa gets to help make dumplings this year to celebrate the New Year. But she worries if anyone will eat her funny-looking dumplings. Set in the Hawaiian islands, this story celebrates the joyful mix of food, customs, and languages from many cultures.
Jama Kim Rattigan, a third-generation Korean-American, was born and raised on the Hawaiian island of Oahu. After receiving a master's degree in English from the University of Hawaii, she taught for several years and then began writing full time. The inspiration for Dumpling Soup grew out of her vivid childhood memories of celebrating the New Year with her extended family was well as her desire to convey the rich cultural diversity of Hawaii to young readers.

Lillian Hsu-Flanders was born in Camden, NJ, and attended college and graduate school in New England. As a child, she enjoyed many Chinese family gatherings much like the one described in the story, and continues to make, eat, and love dumplings today.