Skunk Works: A Personal Memoir of My Years of Lockheed (Paperback) 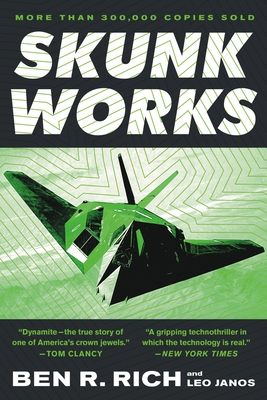 Skunk Works: A Personal Memoir of My Years of Lockheed (Paperback)


Ships to Our Store in 1-5 Days
This classic history of America's high-stakes quest to dominate the skies is "a gripping technothriller in which the technology is real" (New York Times Book Review).   From the development of the U-2 to the Stealth fighter, Skunk Works is the true story of America's most secret and successful aerospace operation. As recounted by Ben Rich, the operation's brilliant boss for nearly two decades, the chronicle of Lockheed's legendary Skunk Works is a drama of Cold War confrontations and Gulf War air combat, of extraordinary feats of engineering and human achievement against fantastic odds.  Here are up-close portraits of the maverick band of scientists and engineers who made the Skunk Works so renowned. Filled with telling personal anecdotes and high adventure, with narratives from the CIA and from Air Force pilots who flew the many classified, risky missions, this book is a riveting portrait of the most spectacular aviation triumphs of the twentieth century. "Thoroughly engrossing." --Los Angeles Times Book Review
Ben Rich headed the Skunk Works from 1975 until he retired in 1991. He died in 1995. Leo Janus is the author of Yeager, the acclaimed bestselling autobiography of test pilot Chuck Yeager.

"Dynamite -- the true story of one of America's crown jewels." —Tom Clancy