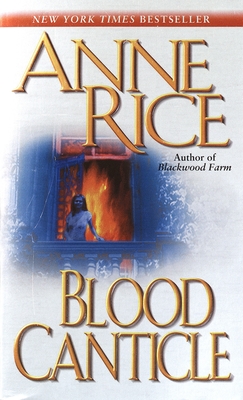 This is book number 10 in the Vampire Chronicles series.

Surrounded by its brooding swampscape, Blackwood Farm is alive with the comings and goings of the bewitched and the bewitching. Among them is the ageless vampire Lestat, vainglorious enough to believe that he can become a saint, weak enough to fall impossibly in love.

Gripped by his unspeakable desire for the mortal Rowan Mayfair and taking the not so innocent, new-to-the-blood Mona Mayfair under his wing, Lestat braves the wrath of paterfamilias Julien Mayfair and ventures to a private island off the coast of Haiti. There, Saint Lestat will get his chance to slay his dragon. For Mona and the Mayfairs share an explosive, secret blood bond to another deathless species: a five-thousand-year-old race of Taltos, strangers held in the throes of evil itself.
Anne Rice is the author of thirty-seven books, including the Vampire Chronicles, the Lives of the Mayfair Witches, and the Wolf Gift book series. Rice was born in New Orleans in 1941 and grew up there and in Texas. She lived in San Francisco with her husband, the poet and painter, Stan Rice until 1988, when they returned to New Orleans to live with their son, Christopher. In 2006, Rice moved to Rancho Mirage, California. She died in 2021.

“Seductive . . . Rice draws on the most tantalizing pieces from past novels and blends them artfully with new revelations.”
–Orlando Sentinel