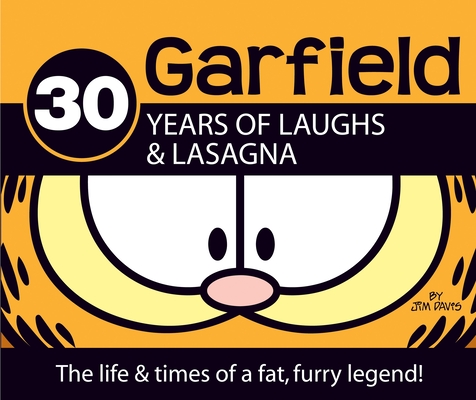 Celebrate the big 3-0 with the lasagna-loving legend!

When the world’ s most famous feline hits the three-decade milestone it’s time to celebrate! 30 Years of Laughs & Lasagna is a tribute to this tremendous achievement. Organized by decade, each with an introduction by Jim Davis, this lavishly illustrated volume features more than four hundred strips, including thirty of Jim Davis’s all-time favorites–with informative remarks from Jim on why they made the grade. Packed with early sketches, enlightening quotes, and fun facts (did you know that the Garfield comic was originally titled Jon?), this book shows how Garfield evolved from a witty kitty to a world-renowned fat cat.

Of Jim Davis’s “little hobby,” Blondie cartoonist Dean Young writes: “Every one of [these] little treasures is an exquisite menagerie of comic timing, writing, and cartoon art. It’s easy to see why his strip is continually voted one of the best on our planet by readers everywhere.”

So if you appreciate the unparalleled splendors of layered pasta, need something to ward off those nap attacks, or have a healthy appetite for humor, 30 Years of Laughs & Lasagna is just the ticket. Perhaps Jim Davis puts it best: “This whole line of work is to make people happy and smile.” Garfield’s millions of fans couldn’t agree more.
Jim Davis was born on July 28, 1945, in Marion, Indiana. He later attended Ball State University in Muncie, Indiana, where he distinguished himself by earning one of the lowest cumulative grade point averages in the history of the university. The Garfield strip was born on June 19, 1978, syndicated in forty-one U.S. newspapers. Today it’s syndicated in more than 2,100 newspapers worldwide with more than 200 million readers, leading Guinness World Records to name Garfield The Most Widely Syndicated Comic Strip in the World. Davis has had many successes with Garfield,including four Emmy Awards for Outstanding Animated Program and induction into the Licensing Hall of Fame (1998), but his most prized awards are from his peers in the National Cartoonist Society: Best Humor Strip (1981 and 1985), the Elzie Segar Award (1990), and the coveted Reuben Award (1990) for overall excellence in cartooning.