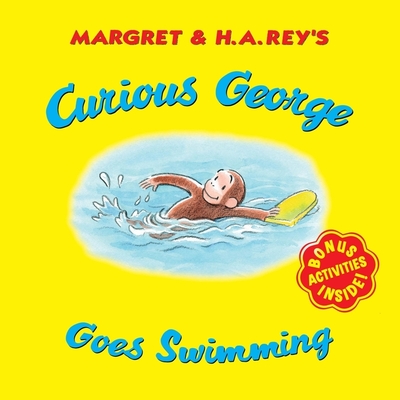 
Available at One of Our Locations
Spend a splashy summer day at the pool with Curious George! In this storybook, George helps his friend Lucy learn to swim, despite her fears. But can our favorite mischievous little monkey follow the pool rules?

Curious George and his friend are spending a fun summer day at their local pool. Kids are swimming, diving, and playing pool games, and there’s even a snack stand! George can’t wait to spend the whole day in the water, but when he sees his friend Lucy afraid to swim, George wants to help. Join George as he learns the pool rules and has lots of summer fun at the pool!

Hans and Margret Rey created many books during their lives together, including Curious George, one of the most treasured classics of all time, as well as other favorites like Spotty and Pretzel. But it was their rambunctious little monkey who became an instantly recognizable icon. After the Reys escaped Paris by bicycle in 1940 carrying the manuscript for the original Curious George, the book was published in America in 1941. More than 200 Curious George titles followed, with 75 million books sold worldwide. Curious George has been successfully adapted into a major motion picture and an Emmy-winning television show on PBS.