Chaos Under Heaven: Trump, Xi, and the Battle for the Twenty-First Century (Hardcover) 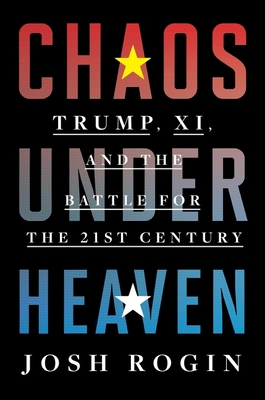 Chaos Under Heaven: Trump, Xi, and the Battle for the Twenty-First Century (Hardcover)


Ships to Our Store in 1-5 Days
The explosive, behind-the-scenes story of Donald Trump’s high-stakes confrontation with Beijing, from an award-winning Washington Post columnist and peerless observer of the U.S.–China relationship

There was no calm before the storm. Donald Trump’s surprise electoral victory shattered the fragile understanding between Washington and Beijing, putting the most important relationship of the twenty-first century in the hands of a novice who had bitterly attacked China from the campaign trail. Almost as soon as he entered office, Trump brought to a boil the long-simmering rivalry between the two countries, while also striking up a “friendship” with Chinese president Xi Jinping — whose manipulations of his American counterpart would undermine the White House’s already disjointed response to the historic challenge of a rising China. All the while, Trump’s own officials fought to steer U.S. policy from within.

By the time the COVID-19 pandemic erupted in Wuhan, Trump’s love-hate relationship with Xi had sparked a trade war, while Xi’s aggression had pushed the world to the brink of a new Cold War. But their quarrel had also forced a long-overdue reckoning within the United States over China’s audacious foreign-influence operations, horrific human rights abuses, and creeping digital despotism. Ironically, this awakening was one of the biggest foreign-policy victories of Trump’s fractious term in office.

​Filled with shocking revelations drawn from Josh Rogin’s unparalleled access to top U.S. officials from the White House and deep within the country’s foreign policy machine, Chaos Under Heaven reveals an administration at war with itself during perhaps our most urgent hour.
JOSH ROGIN is a Washington Post foreign policy columnist and CNN political analyst. He has reported for Bloomberg View, the Daily Beast, Foreign Policy, Congressional Quarterly, Federal Computer Week, and Japan’s Asahi Shimbun. He lives in Washington, DC.

“The ultimate insider’s account of the making and mismaking of China policy by the Trump administration?—?a chilling twin portrait of the relentless advance of Xi Jinping and the venomous backbiting among Donald Trump and his advisers, who tried unsuccessfully to combat it. There are scoops on nearly every page. Read it and weep: Chaos Under Heaven reveals how China rose and America flubbed its response.”  — DAVID IGNATIUS, Washington Post columnist

“In Chaos Under Heaven, Josh Rogin tells a deeply reported, briskly written, and compelling story of how President Trump and his team struggled to deal with the significant economic and national security threats posed to the US by the Chinese government. This book is a must-read for anyone looking for insight into why this new cold war matters to every American.”  — JAKE TAPPER, CNN anchor

“Chaos Under Heaven is required reading for anyone who wants to know what happened between America and China during Trump’s tumultuous four years in the White House. Josh Rogin’s account is rich in detail and full of insight into the events and people that drove the United States as it began to change many of its longstanding policies in dealing with Beijing.”  — JAMES MANN, New York Times best-selling author of The China Fantasy and Rise of the Vulcans

“Josh Rogin is an outstanding journalist who breaks news all the time. And there’s certainly lots of news in his extraordinary book. He takes us behind the scenes to get a real appreciation of this critically important relationship. Chaos Under Heaven is well written and incisive?—?and once you start reading, you won’t want to put it down.”  — WOLF BLITZER, CNN Anchor

“Josh Rogin’s superbly researched 'Chaos Under Heaven: Trump, Xi, and the Battle for the Twenty-First Century' is the first book-length dive into that newborn competition [between the U.S. and China] . . . In what could be the plot of a thriller, Mr. Rogin traces Washington’s efforts to engage the CCP threat . . . Mr. Rogin’s research on the murky origins of the ‘Wuhan virus’ is darkly fascinating.”  — Wall Street Journal

"Chaos Under Heaven moves quickly, is well-written and draws the reader in." — The Guardian

"Outstanding . . . That Mr. Rogin manages to capture the complexity and multi-faceted nature of the China challenge is a testament to his writing and reporting. This is a must-read book . . . Chaos Under Heaven is the best single volume on the totality of China’s reach and influence, and our muddled policy over the last four years."  — Diplomatic Courier

"Packing the account with insider details, Rogin makes a persuasive case that confronting China’s rise is essential to world affairs. Readers will appreciate this in-depth look behind the headlines."  — Publishers Weekly