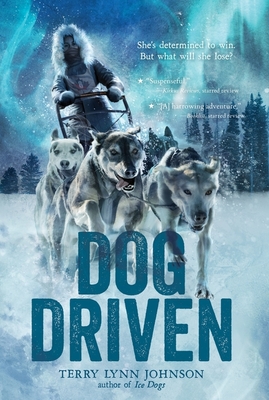 
Available at One of Our Locations
From the author of Ice Dogs comes a riveting adventure about a musher who sets out to prove her impaired vision won't hold her back from competing in a rigorous sled race through the Canadian wilderness. Perfect for fans of Gary Paulsen.

McKenna Barney is trying to hide her worsening eyesight and has been isolating herself for the last year. But at the request of her little sister, she signs up for a commemorative mail run race in the Canadian wilderness—a race she doesn’t know if she can even see to run.

Winning would mean getting her disease—and her sister’s—national media coverage, but it would also pit McKenna and her team of eight sled dogs against racers from across the globe for three days of shifting lake ice, sudden owl attacks, snow squalls, and bitterly cold nights.

A page-turning adventure about living with disability and surviving the wilderness, Dog Driven is the story of one girl’s self-determination and the courage it takes to trust in others.
Terry Lynn Johnson, author of Ice Dogs, Sled Dog School, Dog Driven and the Survivor Diaries series, lives in Whitefish Falls, Ontario where for ten years she owned a team of eighteen Alaskan Huskies.

*"A densely plotted, fast-moving, thematically rich tale set at the intersection of ability and disability."—Kirkus, STARRED review  *"Johnson’s personal experience of living in Ontario with her own team of Alaskan huskies shines through this book, which bracingly captures the excitement and trepidation of McKenna’s adventure." —Booklist, STARRED Review   "Guy and McKenna are well developed, and the action is captivating." —School Library Journal —