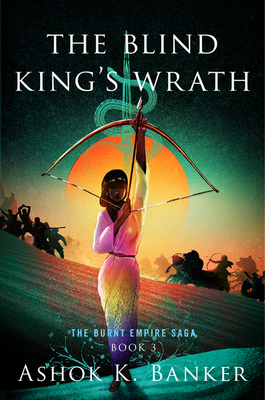 The final chapter in Ashok K. Banker’s acclaimed Burnt Empire Saga, The Blind King’s Wrath depicts the climactic battle between Krushni and her father, the Demonlord Jarsun, for the Burning Throne and the fate of the Krushan dynasty

The Demonlord Jarsun is poised to claim the Burning Throne and cement his rule over the Burnt Empire. Standing in his way is his daughter, now reincarnated into a new avatar named Krushni, who is determined to avenge her mother’s death by his hand—and put an end to her father’s reign of terror once and for all. Aligned with him is the vast army of the Empire, the One Hundred children of Emperor Adri, and their former guru, the legendary warrior Dronas.

Krushni has allies too. Also opposing the tyrant Jarsun are the children of his nephew Shvate—the supernaturally-gifted quintet known as the Five. But Krushni and The Five are vastly outnumbered, while other rogue individuals like Ladislew, the warrior-witch, serve their own secret agendas.

In this final volume of Banker’s epic saga of the Krushan dynasty, the land of Hastinaga will be torn asunder as the final battle for the empire rages between father and daughter, uncle and nephew, lover and enemy. And the Burning Throne will revel in the violence of it all.

ASHOK K. BANKER is the author of more than seventy books, including the internationally acclaimed Ramayana series. Their works have all been bestsellers in India and have sold around the world. They live in Southern California.

“Upon A Burning Throne is a tale told with masterful control over the narrative. The pace never slackens and the story is never offered up at the altar of world-building details. Upon A Burning Throne is undoubtedly a compelling read—it is one of those ‘on-the-edge-of-your-seat’ novels which keeps the reader hooked right till the end. I would, therefore, recommend it to all lovers of fiction.” — A Hindu's View