Capitalism and Democracy in the Twenty-First Century: A Global Future Beyond Nationalism (Paperback) 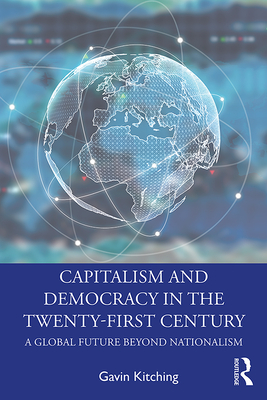 By Gavin Kitching
Email or call for price

This short book makes a connection between recent 'tectonic shifts' in the world economy and the political problems currently confronted by western democracies.

The shift of manufacturing away from the West, allied to the pressure to keep costs down in an increasingly competitive global economy, has led to economic inequality, reliance on service industry employment and public sector austerity. All this has in turn produced large numbers of desperate citizens attracted to a populist economic nationalism accompanied by xenophobia. However, the originality of this text lies not in the above argument, but in the philosophical reflections which drive and derive from it. These include reflections on history as a supposed causal process; on the need to make ethical judgements of economic activities and the difficulties of doing so; and on the problems confronting modern citizens in understanding complex economic processes and their political implications.

Capitalism and Democracy in the Twenty-First Century endorses Wittgenstein's 'praxis' approach to human social life and its study. Accordingly, it not only analyses economic and political problems but suggests ways of solving or mitigating them. In doing so it relies on Marx's conviction that our capacity to see certain phenomena as problems is at least a priori evidence that they can be solved. This book will appeal to undergraduate and postgraduate students of politics, comparative politics, political economy and international relations.

Gavin Kitching is an Emeritus Professor of Politics in the School of Social Sciences, University of New South Wales, and a Fellow of the Australian Academy of Social Sciences. In a career spanning nearly 50 years he has made award-winning contributions to the fields of African studies, development studies, the politics and economics of globalisation, and the philosophy of social science.