The Lion House: The Coming of a King (Hardcover) 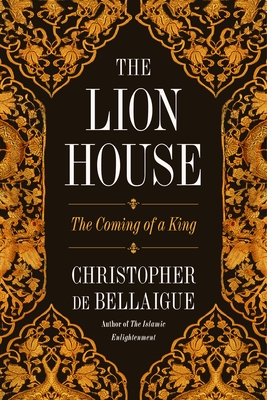 The Lion House: The Coming of a King (Hardcover)

“Christopher de Bellaigue has a magic talent for writing history. It is as if we are there as the era of Suleyman the Magnificent unfolds.” —Orhan Pamuk, winner of the Nobel Prize in Literature

Narrated through the eyes of the intimates of Suleyman the Magnificent, the sixteenth-century sultan of the Ottoman Empire, The Lion House animates with stunning immediacy the fears and stratagems of those brought into orbit around him: the Greek slave who becomes his Grand Vizier, the Venetian jewel dealer who acts as his go-between, the Russian consort who becomes his most beloved wife.

Within a decade and a half, Suleyman held dominion over twenty-five million souls, from Baghdad to the walls of Vienna, and with the help of his brilliant pirate commander, Barbarossa, placed more Christians than ever before or since under Muslim rule. And yet the real drama takes place in close-up: in small rooms and whispered conversations, behind the curtain of power, where the sultan sleeps head-to-toe with his best friend and eats from wooden spoons with his baby boy.

In The Lion House, Christopher de Bellaigue tells the story not just of rival superpowers in an existential duel, nor of one of the most consequential lives in human history, but of what it means to live in a time when a few men get to decide the fate of the world.

Christopher de Bellaigue is the award-winning author of five books, including The Islamic Enlightenment, which was short-listed for the Baillie Gifford Prize for Non-Fiction in 2017 and the Orwell Prize for Political Writing in 2018. As a reporter in the 1990s and 2000s, he covered politics and invasions in Turkey, the Middle East, and South Asia for The Economist, The Guardian, and The New York Review of Books, among other publications. He has also made television and radio programs and has lectured at universities and in boardrooms around the world.

"Sweeping... [An] appetite for detail gives the book its vividness and energy... De Bellaigue relishes luxury, spectacle and precise vocabulary. He writes with supreme confidence about power, diplomacy, clothing, avarice, war, statecraft and the exceptional brutality of the era... The Lion House unfolds like a novel, through scenes rich with authenticating detail."
—Marcel Theroux, New York Times Book Review

"Exquisite . . . So arresting is this book, so enveloping in the tensions of its narrative, that most readers will feel a pang of sorrow that the tale does not run on. The Lion House leaves us with a tease, or taunt: 'Who, apart from God, can say what will come next?' A sequel, surely. Although it was the peak of the Ottoman Empire, Suleyman’s reign also offers clear glimpses of a great decline to come. Who better to tell us about it than Mr. de Bellaigue?" —Tunku Varadarajan, The Wall Street Journal

"A vivid, cinematic account of the rise of Suleyman the Magnificent . . . De Bellaigue follows with exhilarating clarity and suspense the era’s broader battles across Europe, North Africa, and the Middle East, and the individual trajectories—grand ambitions, rivalries, betrayals—of these outsiders in Suleyman’s court, a place rife with intrigue and back-stabbing, rich with colorful characters."
—Claire Messud, Harper's

"An eloquent historical investigation of a legendary ruler . . . A vivid, you-are-there re-creation of time and place."
—Kirkus Reviews

“Wolf Hall for the Ottoman Empire . . . History at its most gripping . . . A gripping story told with intelligence, knowledge and verve.”
—Daily Telegraph

“Those lucky readers who come to Christopher de Bellaigue’s book in proximity to reading Mantel can suddenly have a new panel thrown open to them like an unfolding altarpiece . . . all written in the present tense. This creates the obvious sense of liveliness and urgency . . . de Bellaigue sets about the task with such confidence and skill that it works . . . a dazzling and dark work. Witty and often wise, it speaks to the frailties and the precarity of power.”
—David Aaronovitch, The Times

“Reads like the most gripping fiction . . . could very well be Netflix’s next epic.”
—Radio Times

“An urgent, immersive, present-tense gallop . . . the book reads as a non-fiction novel . . . cinematically vivid tableaux . . . Each spangled scene . . . rests on a solid foundation in the primary sources . . . de Bellaigue enriches his storytelling with the colourful, meticulous dispatches of its traders, envoys and spies . . . behind the bejewelled descriptive prose a thumping pulse of action tugs us through . . . de Bellaigue’s glittering, deft and often witty prose adds pleasure to each page.”
—Financial Times

“Luminous, erudite . . . a gripping account that evokes an epic poem, saga or ‘book of kings’ . . . It is as immersive as the blurb claims, conjuring the world of the eastern Mediterranean, Anatolia and south-eastern Europe in the early 16th century with the limpid clarity of the many gems that stud its pages . . . Even more than the detail, it is the characters that intrigue and often inspire . . . The book leaves the reader with Suleiman truly magnificent.”
—Spectator

"An intricate and evocative account of 16th-century Ottoman ruler Suleyman I’s rise to power . . . [de Bellaigue] endows the complex power plays and diplomatic intrigues with a sense of immediacy . . . An incisive portrait of a ruler on the cusp of greatness."
—Publishers Weekly

"Christopher de Bellaigue has a magic talent for writing history. It is as if we are there as the era of Suleyman the Magnificent unfolds."
—Orhan Pamuk, Winner of the Nobel Prize for Literature

"Poised effortlessly between two worlds and two ages, as at home in Istanbul as in the chambers of Venice, alert to every nuance of costume and gesture which is the key to imperial power, de Bellaigue brings you into councils and banquets, through sieges and bedrooms in a book as pungent and mysterious as the age it depicts"
—Rory Stewart, former British Cabinet Minister and Senior Fellow at the Jackson Institute for Global Affairs, Yale University

“The Ottoman Empire at the very height of its power and glory, narrated with a verve and flair that makes the characters burst from the pages. Outstanding history and an incredibly good read.”
—Eugene Rogan, author of The Fall of the Ottomans

“Once you open The Lion House a historical universe is presented to the reader that captivates and astonishes. Christopher de Bellaigue writes with brilliance and The Lion House is near-impossible to put down. It is a superb example of historical literature and research, opening a vista upon Suleyman’s ascent, one of the most significant in world history.”
—Richard Whatmore, Professor of Modern History at University of St. Andrews

“A galloping, vivid present-tense narrative that brings stunningly to life the scale of Suleyman’s quest for world domination. Non-fiction with the readability of a thriller. Unputdownable.”
—Victoria Hislop, author of The Island

“Riveting, beautifully written and expertly told. De Bellaigue is a wonderful guide to the story of Suleyman’s quest for power and the rise of the Ottomans in a rapidly changing world.”
—Peter Frankopan, author of The Silk Roads, A New History of the World

“Sensuous and scholarly, meticulously researched and deliciously irreverent, The Lion House is an intoxicating journey through the Ottomans’ golden age.”
—Amberin Zaman, former Turkey bureau chief of the Economist and Fellow of the Woodrow Wilson Center

“De Bellaigue guides us through the labyrinths of statecraft and private passions of the Ottoman court, the Doge’s palace and the geographies in between and beyond. The Lion House is full of breath-taking events at the cross-roads of empires happening at a moment in history when notions such as Europe, Asia, Christianity and Islam were infinitely more fluid and permeable than they are today.”
—Kerem Oktem, Professor of International Relations at Ca’ Foscari University, Venice