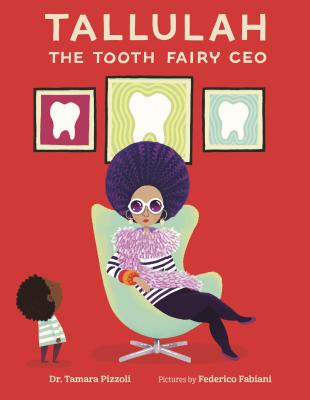 Hilarious and smart, Tallulah the Tooth Fairy CEO is a modern take on the classic tooth fairy story by Tamara Pizzoli with illustrations by Federico Fabiani that is perfect for powerful little leaders ready to take on the world—one tooth at a time.

Meet Tallulah. She’s the Tooth Fairy CEO. Tallulah knows practically everything about being a tooth fairy. How to collect teeth. Dispense money. Train other fairies. And it’s all in the Teeth Titans Incorporated Employee Manual.

But when something happens that’s not covered in the manual, what's a fairy to do?

Dr. Tamara Pizzoli is an African American educator born in Texas. For the past few years, she has run a boutique publishing house known as The English School House from Rome, Italy, where she lives with her four young children.

Federico Fabiani is a self-taught illustrator and graphic designer with a background in architecture. He was born and raised in sunny Rome, where he now runs Sundog Studio, a small visual design office. Tallulah the Tooth Fairy CEO is his first illustrated book.

"Tallulah, CEO of Teeth Titans Inc., gives readers a sneak peek into her glamorous life...Details in both Pizzoli's text (Tallulah's also the founder of the National Association for the Appreciation and Care of Primary Teeth, or NAACP-T) and Fabiani's matte illustrations (a series of enormous, Warhol-like prints of Tallulah adorns her walls) will set adult readers chuckling. Funny and provocative." —Kirkus Reviews, starred review

"Tallulah (Tooth Fairy, CEO) is Fashion-Week chic . . . When she encounters a snag in her usual tooth-retrieval routine, her thoughtful solution will only make readers love her more. This is a must- have for all collections. Children and adults alike will fall in love with this hilarious picture book." —Booklist, starred review

"It’s refreshing to see a woman of color not only represented as a classic fantasy figure, as they are often depicted exclusively as white, but also as a successful businesswoman and entrepreneur . . . Illustrations are smooth and give a sleek modern feel to the piece. A fun, solid addition to contemporary fairy tale collections." –School Library Journal