Poems the Size of Photographs (Paperback) 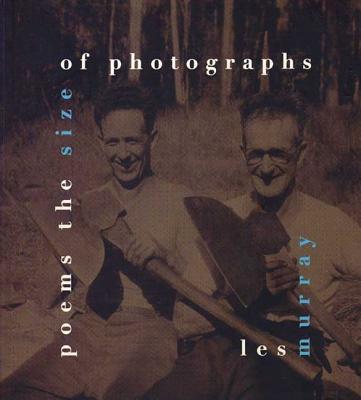 Poems the Size of Photographs (Paperback)

In Poems The Size of Photographs, Les Murray deftly maneuvers through familiar themes--the local terrain of the Australian people, politics, and landscape, as well as the terrain that is harder to render tangible: history, myth, and symbol. As if trying to find the fissure through which to crack open his subject matter, Murray has sharpened his form to an ideogrammatic brevity. Each snapshot-like poem in this volume develops before the reader's very eyes, as the initially observed object or moment in time changes meaning and grows in complexity and resonance line by line.

Les Murray (1938-2019) was a widely acclaimed poet, recognized by the National Trust of Australia as one of the nation’s treasures in 2012. He received the T. S. Eliot Prize for the Best Book of Poetry in English in 1996 for Subhuman Redneck Poems, and was also awarded the Gold Medal for Poetry presented by Queen Elizabeth II.

Murray also served as poetry editor for the conservative Australian journal Quadrant from 1990-2018. His other books include Dog Fox Field, Translations from the Natural World, Fredy Neptune: A Novel in Verse, Learning Human: Selected Poems, Conscious and Verbal, Poems the Size of Photographs, and Waiting for the Past.

“This is a survivor's poetry commissioned not by trauma but by the confidence of being alive and able.” —The New Yorker on Conscious and Verbal