First Great Triumph: How Five Americans Made Their Country a World Power (Paperback) 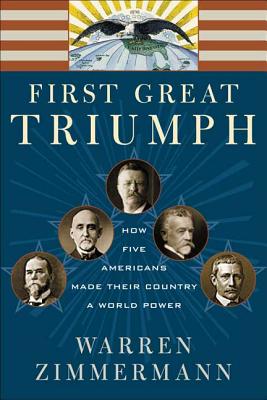 "We were sure that we would win, that we should score the first great triumph in a mighty world-movement."--Theodore Roosevelt, 1904

Americans like to think they have no imperial past. In fact, the United States became an imperial nation within five short years a century ago (1898-1903), exploding onto the international scene with the conquest of Cuba, Puerto Rico, the Philippines, Hawaii, Guam, Samoa, and (indirectly) Panama. How did the nation become a player in world politics so suddenly-and what inspired the move toward imperialism in the first place?

Zimmermann's discerning account of these five men also examines the ways they exploited the readiness of the American people to support a surge of expansion overseas. He makes it clear why no discussion of America's international responsibilities today can be complete without understanding how the United States claimed its global powers a century ago.

Warren Zimmermann spent thirty-three years as an officer in the U.S. Foreign Service, serving in France, Austria, Spain, Switzerland, Venezuela, the Soviet Union, and as our last ambassador to Yugoslavia. He has taught at Columbia and Johns Hopkins Universities and is the author of Origins of a Catastrophe: Yugoslavia and Its Destroyers, which won the American Academy of Diplomacy Book Award in 1997. His work has appeared in The New York Review of Books, Newsweek, The National Interest, and national newspapers. He and his wife live in the Washington, D.C., area.

“Excellent . . . An engrossing and timely history of five men who embraced the imperialist ethic.” —James Chace, The New York Review of Books

“What gives Mr. Zimmermann's book its special character is his singling out of Roosevelt, Lodge and company as 'the fathers of American imperialism' and showing how their vision of the nation was transformed into reality. And that makes for a good story, full of craggy individualists and events that retain their power to amaze.” —Richard Bernstein, The New York Times

“Riveting . . . [First Great Triumph] is essential background for anyone interested in how the United States arrived at its present place in the world . . . [and] a fascinating visit to an era that has received far too little attention.” —Richard Holbrooke, Foreign Affairs