The Burning Shores: Inside the Battle for the New Libya (Paperback) 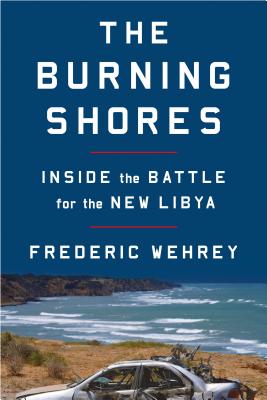 The Burning Shores: Inside the Battle for the New Libya (Paperback)

A riveting, beautifully crafted account of Libya after Qadhafi.

The death of Colonel Muammar Qadhafi freed Libya from forty-two years of despotic rule, raising hopes for a new era. But in the aftermath, the country descended into bitter rivalries and civil war, paving the way for the Islamic State and a catastrophic migrant crisis.

In a fast-paced narrative that blends frontline reporting, analysis, and history, Frederic Wehrey tells the story of what went wrong. An Arabic-speaking Middle East scholar, Wehrey interviewed the key actors in Libya and paints vivid portraits of lives upended by a country in turmoil: the once-hopeful activists murdered or exiled, revolutionaries transformed into militia bosses or jihadist recruits, an aging general who promises salvation from the chaos in exchange for a return to the old authoritarianism. He traveled where few Westerners have gone, from the shattered city of Benghazi, birthplace of the revolution, to the lawless Sahara, to the coastal stronghold of the Islamic State in Qadhafi’s hometown of Sirt. He chronicles the American and international missteps after the dictator’s death that hastened the country’s unraveling. Written with bravura, based on daring reportage, and informed by deep knowledge, The Burning Shores is the definitive account of Libya’s fall.

Frederic Wehrey is a senior fellow at the Carnegie Endowment for International Peace. His writing on Libya has appeared in the New Yorker, the Atlantic, the New York Times, and other publications. A U.S. military veteran with tours across the Middle East, he holds a doctorate in international relations from Oxford University. His first book, Sectarian Politics in the Gulf, was chosen as a "Best Book on the Middle East" by Foreign Affairs magazine. Born and raised in southern California, he now lives in Washington DC.

"A deeply informed and reported account of the complex struggles for political control that followed the overthrow of Muammar Qaddafi in 2011 . . . Few writers I’ve encountered on this often bafflingly opaque scene succeed in bringing it so lucidly to life." —Matt Seaton, The New York Review of Books Daily

“Impartial and engrossing, this is one of the few accessible introductions to the contours of a conflict that the West has chosen almost entirely to ignore.”
—Publishers Weekly

"Solidly objective and nonpartisan . . . The Burning Shores is a must-read . . . [it] systematically unpacks the dizzying post-Qadhafi Libya." —Francis Tapon, Forbes

"Wehrey brings the eye of a military professional, a scholar, and a journalist to this vivid depiction of the Libyan conflict." —John Waterbury, Foreign Affairs

"The Burning Shores is an exceptional book. While a number of studies of the 17 February revolution have been published in recent years and several of them have described themselves as the ‘definitive’ study of the Libyan revolution, this is the best to appear so far. It is authoritative, informative, accessible and should stand the test of time." —Ronald Bruce St John, International Affairs

"With a lively and humane pen, [Wehrey] sketches the rough and sometimes dizzying path of this wealthy North African state with a small population . . . The Burning Shores avoids the abstract jargon of political scientists and the paternalism of sociologists . . . Remarkable for its accessibility and clarity." —Jalel Harchaoui, Politique étrangère (France)

"A gripping narrative that combines on-the-ground reporting with sober, level-headed analysis . . . Wehrey tells his tale in a very empathetic way and with an obvious affection for the country and its people. One of the joys of this book is that Libyans are allowed to speak for themselves." —Alison Pargeter, Current History

"Wehrey provides an insightful explanation of the difficulties facing the United States and other nations to stabilize a ravaged country and build democratic institutions. His analysis is sobering for American policymakers and tragic for Libyans. Highly recommended.—Elizabeth Hayford, Library Journal (starred review)

"An engaging blend of memoir, investigation, history and reportage....Especially revealing is a comment from a despairing Libyan intelligence officer, who told the author: 'We overthrew Qadhafi and now we don't know what to do." Wehrey calls this the 'clearest explanation yet I'd heard for Libya's troubles.' The same can easily be said about his own book." —Hussein Ibish, BookForum

"A searing tale of violence, chaos, and unintended consequences in post-Gadhafi Libya . . . Essential reading for anyone interested in the facts of the Benghazi attacks and in the future of a definitively troubled region.” —Kirkus Reviews

"Frederic Wehrey has written an invaluable book on Libya, much of which is based on the time he spent in that country as both a scholar and a US military officer... his work is particularly insightful in considering Libya’s extremely complex and evolving security situation." —W. Andrew Terrill, The Middle East Journal

"A vivid account . . . [Wehrey] witnessed the moment firsthand — and then watched as it fell apart" —All Things Considered (NPR)

"An authoritative and well-researched narrative. Wehrey’s sense of humanity highlights the messy and complex nature of the conflict . . . [The Burning Shores] reads, in parts, more like a thriller than a history." —Strategy Bridge

"A remarkable firsthand account that gives readers a close sense for developments in the country" —Wolfram Lacher, The Middle East Journal

“Frederic Wehrey’s book is a masterpiece: an authoritative history of Libya’s tragic descent into chaos and a riveting narrative. This is an essential story, too often clouded by tribal complexities and the partisan legacy of ‘Benghazi,’ and Wehrey is the ideal person to tell it. His deep knowledge of the country and of the American role there—political and military—shines through on every page.” —Robert F. Worth, contributing writer, New York Times magazine, and author of A Rage for Order: The Middle East in Turmoil, from Tahrir Square to ISIS

“A vividly detailed, elegantly written portrait of Libya in turmoil. A gifted storyteller and accomplished scholar, Frederic Wehrey brings Libya’s tragedy to life—from the otherworldly strangeness of the Qadhafi era to the chaotic hope of the revolution, from the passionate diplomacy of J. Christopher Stevens to the collapse of postrevolutionary order. A wonderfully readable and insightful book.” —Ambassador William J. Burns, President, Carnegie Endowment for International Peace, and former Deputy Secretary of State

“Libya’s heartbreaking descent into civil war after the uprising against Qadhafi’s tyranny is recounted here with authority, sympathy, and daring. Frederic Wehrey is one of the world’s most knowledgeable Libya watchers; in this book he also proves to be a discerning analyst and a deft story-teller, examining the infinite complexity of Libyan politics with respect and often affection for the Libyans who struggle to make sense of their country. If you read only one book about this North African tragedy, read The Burning Shores.” —Lisa Anderson, Dean Emerita, Columbia University School of International and Public Affairs, and author of The State and Social Transformation in Tunisia and Libya, 1830 –1980 and other books

“With refreshing clarity of mind, of purpose, and considerable personal courage, Frederic Wehrey has written an excellent narrative history of Libya’s catastrophic undoing. For anyone seeking a nonpartisan, coherent accounting of what has gone wrong in Libya since Qadhafi’s fall from power, including the circumstances of the tragic death of U.S. ambassador J. Christopher Stevens in Benghazi, this is the book to read.” —Jon Lee Anderson, The New Yorker staff writer, and author of The Fall of Baghdad

"[The Burning Shores] is an essential contribution...of excellent literary quality...[it] allows for a deep understanding of the Libyan crisis, its development and its internal as well as external causes. —Roberto Aliboni, The International Spectator

"Easily the best single volume on Libyan politics available today, exhibiting not only extensive knowledge but uncommon sympathy with the many Libyans who struggle to secure peace and prosperity at home." —Lisa Anderson, Lamma: A Journal of Libyan Studies