Exuberance: The Passion for Life (Paperback) 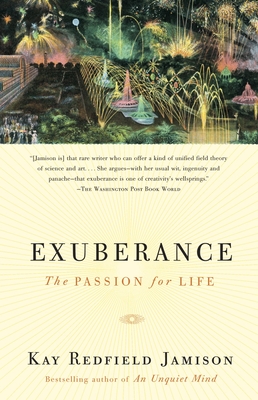 Exuberance: The Passion for Life (Paperback)


Available at One of Our Locations
With the same grace and breadth of learning she brought to her studies of the mind’s pathologies, Kay Redfield Jamison examines one of its most exalted states: exuberance. This “abounding, ebullient, effervescent emotion” manifests itself everywhere from child’s play to scientific breakthrough and is crucially important to learning, risk-taking, social cohesiveness, and survival itself. Exuberance: The Passion for Life introduces us to such notably irrepressible types as Teddy Roosevelt, John Muir, and Richard Feynman, as well as Peter Pan, dancing porcupines, and Charles Schulz’s Snoopy. It explores whether exuberance can be inherited, parses its neurochemical grammar, and documents the methods people have used to stimulate it. The resulting book is an irresistible fusion of science and soul.
KAY REDFIELD JAMISON is a professor of psychiatry at the Johns Hopkins University School of Medicine as well as an honorary professor of English at the University of St. Andrews in Scotland. She is the author of the national best sellers An Unquiet Mind, Night Falls Fast, and Touched with Fire. She is coauthor of the standard medical text on manic-depressive illness and author or coauthor of more than one hundred scientific papers about mood disorders, creativity, and psychopharmacology. Dr. Jamison, the recipient of numerous national and international scientific awards, is a John D. and Catherine T. MacArthur Fellow.
“[Jamison is] that rare writer who can offer a kind of unified field theory of science and art. . . . The origins and mystery of creativity have long been her holy grail, and she argues — with her usual wit, ingenuity and panache — that exuberance is one of its wellsprings.” —The Washington Post Book World“Fascinating reading. . . . On a subject that invites inflates prose, Jamison maintains a deft but not showy eloquence. . . . Trenchant and entertaining.” —San Francisco Chronicle“Jamison brilliantly conjures up characters. . . . A book on exuberance ought to be a romp to read. The one is.” —Los Angeles Times“Jamison has a capacity for moving smoothly between tasty digressions, hard science and sweeping cultural analyses. . . . This reads like a book that was a long time in coming, written by one who came to appreciate the brightest sunlight only after becoming acquainted with the darkest nights.” —The Seattle Times