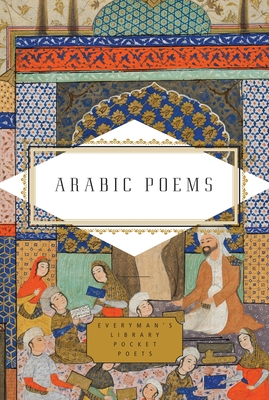 
Available at One of Our Locations
A bilingual anthology of poems from the sixth century to the present, Arabic Poems is a one-of-a-kind showcase of a fascinating literary tradition.

The Arabic poetic legacy is as vast as it is deep, spanning a period of fifteen centuries in regions from Morocco to Iraq. Themes of love, nature, religion, and politics recur in works drawn from the pre-Islamic oral tradition through poems anticipating the recent Arab Spring.

Editor Marlé Hammond has selected more than fifty poems reflecting desire and longing of various kinds: for the beloved, for the divine, for the homeland, and for change and renewal. Poets include the legendary pre-Islamic warrior ‘Antara, medieval Andalusian poet Ibn Zaydun, the mystical poet Rabi‘a al-‘Adawiyya, and the influential Egyptian Romantic Ahmad Zaki Abu Shadi. Here too are literary giants of the past century: Khalil Jibran, author of the best-selling The Prophet; popular Syrian poet Nizar Qabbani; Palestinian feminist Fadwa Tuqan; Mahmoud Darwish, bard of occupation and exile; acclaimed iconoclast Adonis; and more. In their evocations of heroism, nostalgia, mysticism, grief, and passion, the poems gathered here transcend the limitations of time and place.
MARLÉ HAMMOND, a Lecturer in Arabic Popular Literature and Culture at SOAS, University of London, is the author of Beyond Elegy: Classical Arabic Women's Poetry in Context.